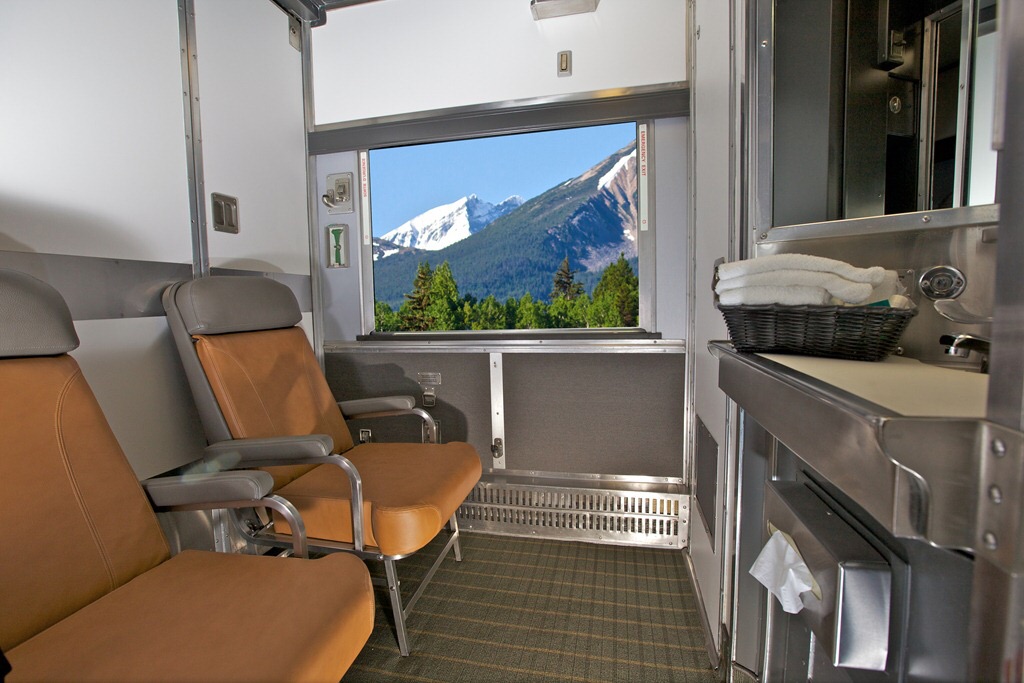 We bought First Class tickets on ViaRail’s Canadian Pacific train between Vancouver and Toronto. It looked spectacular (or “Spak-tacular” if you’re our friends Don and Jennifer Spak) online, but we’ve been fooled before.

Our trip two years ago across Russia on the Trans-Siberian Express was also supposed to be first class. We didn’t know that the Russian definition of First Class is something similar to the conditions Ben-Hur experienced below deck on the Roman battle cruiser.

When we got to our First Class cabin here in Vancouver, Jamie immediately looked around the small room (shown above) and suffered a minor meltdown.

(I just asked her to read the preceding paragraph. She said, “That not what happened.” But she looked very guilty while saying it.)

I must admit that I was also a bit nervous. Instead of beds the room had just two padded seats that were not attached to the floor. You could slide them around on the floor into any position. Definitely not OSHA-approved.

“I hope those aren’t the beds,” she continued. “I can’t sleep on those for four nights. I need beds. Where are the beds?”

“Calm down,” I responded. “I’m pretty sure the beds must somehow fold down out of the wall. Or the ceiling. Or something.”

Turns out this same conversation was going on in the next cabin. When we stepped out into the hallway, the woman next door, right on the edge of panic, looked at us and said, “Have you found your beds? Where are the beds? Have you figured out how to open them up? We can’t find the beds.”

Diversion alert! This story will continue after a brief pause for a back story.

Many years ago I was cursed with a troublesome raccoon. I guess all raccoons are supposed to be troublesome, but this one was tearing up my landscaping and carrying off anything in my backyard that wasn’t tied down.

One night I had a brilliant idea. I borrowed a large cat carrier from my next door neighbor and put some cat food in it. As soon as I saw the raccoon go into the cage and begin eating, I slammed the door shut and covered the cage with a beach towel. My theory was that the raccoon would go to sleep in the darkened cage and the next morning I would put the cage in my car, drive to a nearby national forest and release the raccoon into the wild, where I reasoned, he would be much happier than he was in my backyard.

All worked according to plan until the next morning. When I went out to get the cage I discovered that the raccoon had absolutely shredded the beach towel. He had frantically pulled pieces of the towel into the cage through air vents. Pieces of the towel were sticking out everywhere.

Don’t get me wrong. The raccoon was fine. In fact, he was sitting back looking fat and happy and pretty damn proud of his destructive handiwork.

The story has a happy ending for the raccoon, if not for my beach towel. I drove the little bugger out to the national forest where I’m pretty sure he found a lovely lady raccoon, settled down in a hollow tree trunk, and raised a passel of little raccoons.

Either that or he was eaten by a coyote.

But that is neither here nor there.

Our neighbors in the next cabin, like us, did not know where their beds were. But the man had apparently begun freaking out like Jamie. He had discovered a couple small corners of a sheet poking out from what he assumed was the bed hidden in a wall. He had pulled and tugged on those exposed portions of that sheet until it reminded me of what the raccoon had done to my beach towel.

But while the raccoon had looked pleased with his destruction, our next door neighbor just looked embarrassed.

The story has a happy ending.

We went to the observation car for a few minutes and when we returned two beds had magically appeared in our cabin. We’re not quite sure where they came from nor where they’ll go, but we don’t care because we have beds. Beds with lovely sheets, comfortable mattresses, and cushy pillows. Jamie couldn’t have been happier.

No telling if the guy next door can say the same.