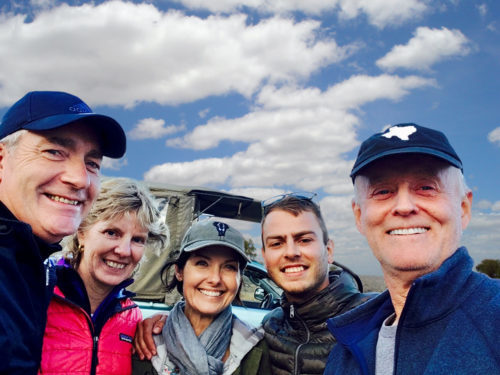 Vuyani’s guides took us on safari drives in their huge private reserve every morning and every afternoon. Three trucks packed with guests went out for about three hours each time. But we decided we wanted to do a smaller safari in Kruger National Park which is known for having even more animals and even more open vistas.

We were told that one other couple would be accompanying us, and much to our surprise, that couple turned out to be our new friends Tony and Angela.

Frank was our guide and Tuli was our driver. They were both great at spotting animals in the bush and positioning our truck to get the best vantage point. Sometimes Tuli would stop the truck or move slowly forward or backward because she spotted an animal long before the rest of us. Other times Frank spotted the animals and communicated almost silently with Tuli to get us in right spot to take photos.

It was a great day with lots of laughs and lots of animals. In fact, we saw four of the Big Five — lion, elephant, rhino, and Cape buffalo. The only one we missed was the leopard.

When Rex, Vuyani’s happy, hulking night guard asked what we saw, Jamie told him we were disappointed that we didn’t see a leopard.

His response, “Ahhh, the spots. Always the spots.”