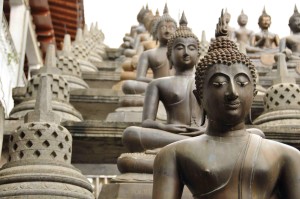 Jamie lost our passports the day we were scheduled to leave on our previous trip around the world. I screwed up our Sri Lanka visas this trip.

When I first suggested that we add Sri Lanka to our itinerary, Jamie thought I was crazy. She didn’t really know much about the country, but was vaguely aware that it’s usually mentioned in the news for two primary reasons: Grinding poverty and a longtime civil war. Neither, she reasoned, were good reasons to visit. Fact is, I’m not even sure why I wanted to visit Sri Lanka except that I was vaguely aware that it’s supposed to be exceptionally beautiful. Well, that and the fact that science fiction author Arthur C. Clarke lived there from 1956 until he died in 2008. I figured that if it was good enough for the author of 2001: A Space Odyssey, it was good enough for me.

I was persistent enough that she did some Googling. She found out that we could take a safari to see elephants in the wild. And I found an absolutely incredible resort built in the middle of an 18th century tea plantation. Believe it or not, the combination of those two things turned Sri Lanka into the one place we most wanted to visit.

Then I screwed up our visas.

You apply for the visas (actually ETAs, Electronic Travel Authorities) online. It was a simple form that any moron could have filled out, but I screwed it up. I didn’t know I’d screwed them up until the next day when they arrived via email. When I read them they said “Must be used before 9-12-15”.

Uh-oh. I started sweating. It appeared to mean that our visas expired the day before we were scheduled to arrive.

The application had asked for our Port of Departure and our travel date and I assumed it meant “Where are you flying from and when do you arrive?” so I wrote “London” and “September 12” but it actually meant “When are you leaving Sri Lanka and from where?” and the answer should have been “Colombo” and “September 22”.

I immediately sent an email to the address shown on the Sri Lanka ETA website. I explained my mistake and begged them to help me correct it. No answer after 24 hours. No answer after 48 hours. So I sent another email. Again, no response.

I should probably point out at this point that I hadn’t mentioned my screw-up to Jamie. Sri Lanka had, by this point, become her obsession, the place she wanted to visit more than any other. She wanted to see the elephants in the wild. She wanted to be pampered at the luxurious Tea Trails plantation. I knew I was dead meat if I couldn’t correct my screw-up.

After a week went by I actually called the Sri Lankan phone number shown on the ETA website. I ended up on one of those frustrating phone systems that takes you around in circles and never actually lets you talk to anyone. I called several times and never got connected to an actual human being. (I couldn’t help but wonder if Sri Lanka companies outsource their phone services to Bangalore, India.)

Desperate, I finally had an idea. I called the visa consultant who got us visas for Russia two years ago. Nothing’s tougher than getting in and out of Russia, so I figured he could solve my problem or at least tell me how to solve it.

Instead, the consultant who had been so helpful two years ago said, “There’s nothing we can do.”

“What do you suggest?” I asked.

“Your nearest Sri Lanka consulate is in Houston. Try calling them and explaining your problem.”

Crap. That wasn’t the answer I wanted.

So I called the consulate and explained my problem to the pleasant young man who answered. He didn’t seem to understand what I was saying. He asked me to explain it again.

“Sir,” he said, still laughing, “In Sri Lanka we put the day first and the month second like they do in England. So 9-12-15 means the ninth day of the twelfth month and your ETAs are valid until 9 December.”

I couldn’t believe it. I made him explain it again.

Whew! What a relief. I don’t have to sit Jamie down and explain that she’s going to miss her elephant safari and her pampering at Tea Trails because her husband is an idiot.

Well, she won’t miss them, but her husband is an idiot.