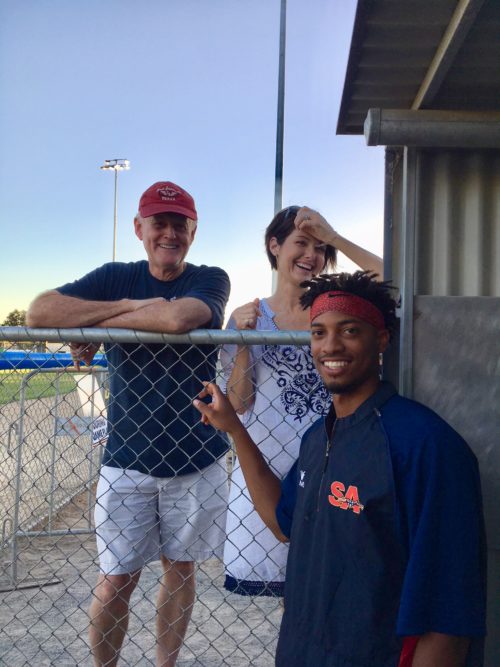 From all the way over here in Angaston, South Australia, I can hear every JimandJamie.com reader loud and clear when they groan as one and say, “There he goes again. How the hell can he possibly know the exact date he became a baseball fan?”

Hah! I have a simple answer to your collective query.

I was a scrawny, freckled ten-year old on that day in that year. It was a night just like every other night except for one thing — my mom had taken me downtown that afternoon to buy me my first radio. It was a tinny, red plastic transistor about the size of a pack of cigarettes and it had been shoddily manufactured with the compete lack of precision for which goods from Japan were famous in the post-war years.

I loved that radio. It may have been the best gift I ever received. So instead of finishing my homework and going to sleep as I did every other night, I stayed awake late into that early May night, carefully moving the inaccurate tuner from one station to another. My first stop was at 590 on the AM dial, but KFXM, the station that inhabited that frequency, didn’t interest me because it was a local Top 40 station that my older sister had been listening to for years. I carefully turned the dial to the right in search of something new, something different, something more exotic. When I reached 640 AM, I was stopped by the roar of a crowd and a magical voice emanating from the red radio’s tiny, tinny speaker.

The station was KFI in Los Angeles and the voice belonged to Los Angeles Dodgers announcer Vin Scully. He was broadcasting a special game that night, an one-time only exhibition contest between the Dodgers and their mortal enemies, the New York Yankees.

Roy Campanella, the Dodgers catcher, one of the game’s best and most beloved players, had suffered a horrible injury in a car crash a year earlier. He had been left a paraplegic, sentenced to a wheel chair for the rest of his life. This very special exhibition game between two bitter rivals had been organized to raise money for Campanella’s medical care.

A crowd of 93,103 — still the largest crowd in baseball history — jammed the Coliseum that night. I still remember the moment they turned off all the stadium’s lights and Vin Scully, he of the magical voice, asked everyone in the crowd to light a match or flick on their cigarette lighters to honor Campanella. The crowd complied and Scully painted the dramatic scene in words as only he could do.

Scully transformed little Jimmy into a baseball fanatic that night and I tuned in again the next night and the next and the next. A few weeks later my mom chastised me for running down radio batteries so quickly, but getting in trouble was a price of admission I was glad to pay for the privilege of tuning in night after night to hear Vin Scully weave words into baseball poetry.

I’ve loved baseball and the Dodgers and Vin Scully ever since that warm night in May 1959. I’ve listened to his lyrical way of describing a baseball game — invoking references to Spartan tactics during the Peloponnesian War and Shakespearean sonnets and Freudian psychology and Broadway musicals and the Large Hadron Collider and countless other deep thoughts that have never entered the heads of any other baseball announcer — thousands of times in the intervening years. Spring training games, regular season games, play-off games, World Series games, and, of course, that first exhibition game.

We’ll get back to Vinny soon enough, but now let’s make a quick jump from that baseball game played in Los Angeles on May 7, 1959 to a cricket game played in Adelaide, South Australia last week.

Jamie and I were sitting in the front row of the second deck at a Big Bash game when a young man said, “Excuse me,” before squeezing past us to get to his seat. I noticed that he was wearing a Los Angeles Dodgers baseball cap, something you don’t often see in South Australia.

A few minutes later, when he squeezed past us again on his way to the concession stands, I asked if he is a Dodgers fan. (I had to ask, you see, because many Aussies wear caps and shirts adorned with American sports team logos, but most of them don’t know if those teams play baseball or football or ice hockey nor if they play in Cincinnati or Seattle or San Diego. They just think the American logos look cool.)

Much to my surprise he answered in a distinct American accent. “Yes, I am. Are you?”

“Absolutely. I love the Dodgers.”

“What about the Angels?

“I hate the Angels.”

“What are you doing in Adelaide?” I asked, fully expecting him to say he was on vacation.

Instead he surprised us by saying, “I’m playing minor league baseball for the Adelaide Bite.” 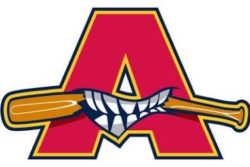 He introduced himself as Chris Powell and said he plays in the Dodgers minor league system. Oddly enough, he grew up in Rancho Cucamonga, California, a proverbial stone’s throw down the road from my hometown. (Hey, we 909 area code guys gotta stick together.)

Chris told us he was scheduled to pitch the following Saturday night, so Jamie and I immediately said we’d drive down to Adelaide to see the game.

“Really?” he said with a huge grin. “If you come to the game, I’ll have free passes waiting for you.”

Well, nothing (and I mean nothing) is more appealing to a Dutch dairy farmer’s son than the word free. So we made the 90 minute drive down to Adelaide’s West Beach baseball complex to see the Adelaide Bite face off against the Sydney Blue Sox. We arrived just minutes before the first pitch and settled into our seats behind home plate, but much to our surprise a stocky Japanese pitcher started the game instead of Chris.

After three innings we wandered down to the far end of the Bite’s dugout and Chris rushed over as soon as he saw us.

“Hey, I’m sorry,” he apologized. “They changed my start from Saturday to Friday, but I had no way to let you know.”

Damn it! We missed a good game. Chris was the winning pitcher, striking out five and giving up only two runs in seven innings.

Oh, well. We had a lot of fun anyway.

Good luck, Chris. You already have the Dodgers cap, and we hope you soon get to wear the rest of the uniform, too.

I promised you a return visit to Vin Scully and we have now arrived at that moment.

One afternoon back when we lived in Southern California’s Orange County, I was window shopping at Newport Beach’s glitzy Fashion Island shopping center. People were coming and going, entering and leaving shops as people are wont to do at shopping centers, when I happened to notice one man exit a store about 200 feet ahead of me. At first I thought nothing of it. He was just another stranger walking in the same direction in which I was walking.

Nevertheless, a wee voice inside my head whispered, “That guy looks like Vin Scully.” But then a competing voice immediately said, “Nah, what would Vinny be doing down here in Orange County?”

Well, I couldn’t take my eyes off of that stranger, and the further we walked, the more he looked like what I imagined the back of Vin Scully would look like if he were walking 200 feet in front of me. I increased my pace just a little.

The closer I got to him, the more convinced I was that this man was, in fact, the world’s greatest baseball announcer, someone I had admired for so many years. 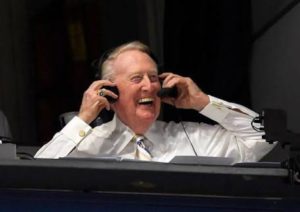 I swear I wasn’t stalking him, but every turn he made took me in the direction of my car somewhere out there in the middle of the immense Fashion Island parking lot. The deeper into the lot we ventured, the more convinced I became that I really was mere steps behind baseball royalty. I increased my pace just a bit more.

By the time I arrived at my car, I was just a few steps behind the man. He turned to open the trunk of the car parked next to mine, and my heart stopped.

It was, in fact, Vin Scully, a man I’d never met, but someone who seemed like a friend, because I had invited into my home almost every spring and summer night for the preceding forty years.

I make a point of never bothering celebrities when I run into them in public. I just cannot imagine how horrible it must be for someone like Brad Pitt to have absolutely no privacy, to have every stranger begging to shake your hand, demanding your autograph, and wanting to include you in their selfies.

But for god’s sake, man, this wasn’t some young upstart like Brad Pitt, it was Vin Freakin’ Scully. I was just as excited at age fifty-something as I would have been at age ten. So instead of getting into my car, I walked over to where he was busily stowing shopping bags in his trunk.

“Excuse me,” I said. “I make a point of never bothering celebrities, but I have to make an exception with you. I just want to thank you for all the joy you’ve brought into my life for the last forty years.”

Vin, always reputed to be a complete gentleman, stuck out his hand, shook mine, and said, “Thank you very much. That’s very kind of you.”

“It’s going to be a sad day in Los Angeles when you decide to retire,” I told him.

And that he did. Vinny was just twenty-two when he broadcast his first game for the Brooklyn Dodgers in 1950 and he just kept callin’ ‘em until finally retiring at the end of the 2016 baseball season. In other words, he spent 67 years behind the microphone and he sounded just as good as ever at the end.

With that, Vin got into his car and I got into mine and we went our separate ways.

But now that I’ve met Chris Powell, I have to admit that I have one regret — I’ll never have a chance to hear Vin Scully say the words, “Chris Powell on the mound.”