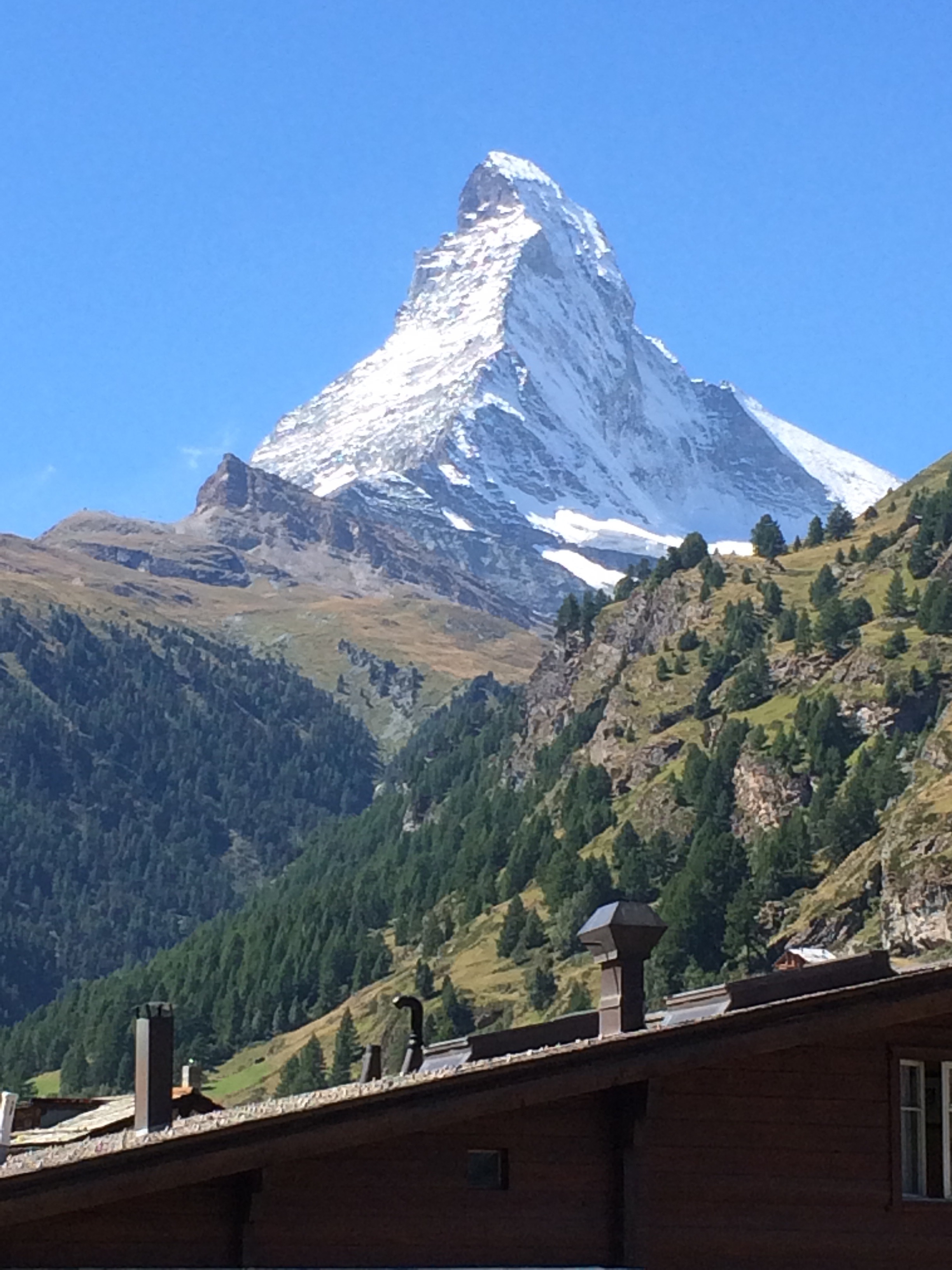 Believe it or not, this is the view out the window of our hotel room in Zermatt, Switzerland. It’s beyond anything the Swiss tourism people could possibly have promised.

We’re staying at the Parkhotel Beau Site, which sits just slightly above Zermatt. The hotel is more than 100 years old and it’s magnificent.

Making hotel reservations online is always a bit of a crapshoot. We’ve learned that we’re better off assuming that hotel websites stretch the truth to the breaking point.

As an advertising guy, I’m skeptical of most advertising. So when the Parkhotel Beau Site’s website said we could get a “mountain view” room, my ad brain kicked in and I wondered exactly what that might mean.

So I sent the Parkhotel Beau Site an email asking for clarification. Their response was quite clear and clearly not open for interpretation: “Mountain view rooms overlook the Matterhorn.”

Much to our surprise, the delightful Parkhotel Beau Site gave us the best room in the hotel. We don’t know why. It’s far from the most expensive room in the house, but I can’t imagine that any other room has a better view. Our room is on the corner of the top floor nearest the Matterhorn. We have floor to ceiling glass on the Matterhorn side of the room and the photo above is the view from our bed.

Yes, that’s what I said. We can lie in bed and look at the Matterhorn.

But let’s pause now for an aside, which I swear to God will eventually bring us back to Zermatt:

Many years ago, when I was a so-called ad agency executive, I served on a non-profit committee with Jack Lindquist, the President of Disneyland. He was an absolutely wonderful guy. We had weekly meetings in his office at which each committee member was required to make a report on the progress they had made in the prior week.

Jack soon realized that I had absolutely no interest in listening to the other committee members relate details of things that had no impact on my area of expertise. So each week he asked me to make my report first and when I was done he’d said, “Jim, why don’t you go out into the park and see how the Matterhorn is doing.”

I’d leave Jack’s office, wander through back stage Disneyland where I’d see things the public never gets to see, like Mickey Mouse without his pants or Pluto without his head or Snow White in her bra, and then enter the park and stroll past the Matterhorn, ride a horse drawn carriage down Main Street, get an ice cream, and finally arrive back at Jack’s office just before the meeting drew to a close.

Each week Jack asked me the same question: “How was the Matterhorn?”

I always said, “It was perfect”, but I never realized how perfect the Matterhorn could really be until today.