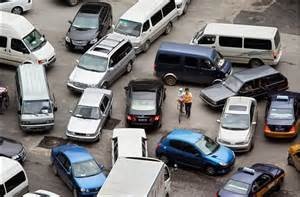 First of all, let’s have a big round of applause for Jamie. She just wrote her first headline (the one above).

My first creative director at DJMC Advertising wrote a radio commercial I’ve always loved. It was for the motocross races at the old Ontario International Speedway. It featured a big, brash, loudmouth who said, “There’s only one rule in motocross. And nobody knows what it is.”

That’s exactly what it’s like on the streets here in China.

Traffic signals, stop signs, lane markers, speed limits and even directional indicators are only suggestions and they are freely ignored. Traffic weaves in and out willy nilly and horns are constantly honking and it’s absolute anarchy. We met a Chinese woman who in perfect English said, “In China all laws are open for discussion.”

You might think things would be safer on the sidewalks, but you’d be wrong. When the streets are too crowded, that’s where all the motorcycles, scooters and bicycles go. Every block you walk, dozens of them miss you by mere inches as they zip down the sidewalk.

If they were in America, each and every single one of these people would have their licenses suspended for the things they do. They wouldn’t last five minutes before they got pulled over and ticketed.

Yet somehow it works.

Back when we were in Russia I said that country’s traffic was insane, but there’s a huge difference between Russian traffic and Chinese traffic:

The Russians drivers were aggressive and angry. They acted as if being passed on the road was a challenge to their masculinity. They screamed. They gestured. They drove at breakneck speeds whenever possible. It was really kind of frightening.

The Chinese, on the other hand, never lose their cool amid the chaos. They seem to take it all in stride because, I guess, they know they’ll be the ones doing something crazy 30 seconds from now.

Here’s the most amazing part: Despite all the craziness, we haven’t seen a single accident. We’ve seen a thousand close calls — including several that involved taxis in which we’ve been passengers — but nary an accident.

Nevertheless, we’re pretty much convinced that every one of the 1.3 billion Chinese is eventually going to die in a traffic accident. The final two will probably meet their inglorious ends when they arrive at a four-way intersection simultaneously and both insist that they have the right-of-way.