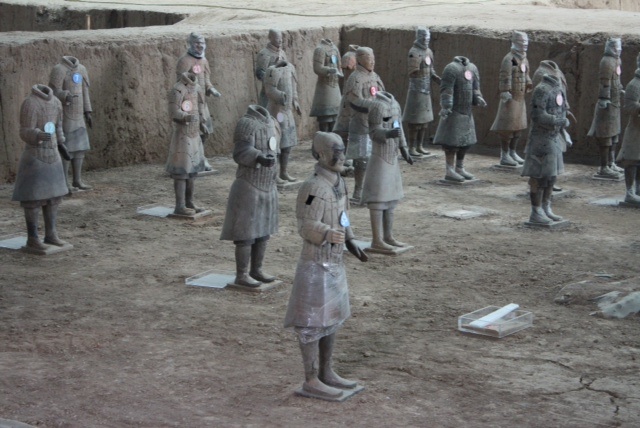 The terra cotta army may be the only good reason to come to Xi’ An.

The first Chinese emperor, the guy who unified the feuding feudal war lords into one country, made a lot of enemies along the way and decided he needed protection in the afterlife. So he created thousands of terra cotta soldiers to stand guard over his tomb.

The emperor wanted to keep his army a secret, so as soon as the craftsmen completed the soldiers, the emperor had them buried. They were buried for 2200 years until a farmer stumbled upon one in 1974 while digging a well. He took it to the government and said, “What the hell is this?” (That may not be an exact translation, but it’s close enough for government work.)

The Chinese government sent crews out to investigate and they unearthed thousands of the terra cotta soldiers. Unfortunately, it turns out that after 2200 years underground the oxygen in the atmosphere quickly begins destroying the bright colors the soldiers had originally been painted.

So in an interesting twist of fate, as soon as researchers dig up another terra cotta soldier, they do a little photography and then quickly re-bury it to preserve the colors.