I’m not quite sure how the primary emphasis of this blog went from travel to male genitalia, but that’s where it seems to have gone.

To tell you the truth, I didn’t even think the honey badger was a real animal. I thought it was apocryphal, like unicorns or griffins or mermaids.

And then I learned otherwise.

We were out on our afternoon safari when a low-slung black and white animal about the size of a small dog darted across our path and disappeared into the scrub brush. Hendrik, our guide, slammed on the brakes of the safari truck, put it in neutral, turned to us, and announced that the animal we had just seen was a honey badger.

Someone in the truck asked the obvious question. “Why would a lion be afraid of such a small animal?”

“Because the honey badger will bite them on the balls!” he said loudly and with uncharacteristic vehemence. “They will bite a large predator on the balls and not let go! Every animal is afraid of them!”

He was so insistent and his comment was so out of character that I thought he was making a joke at the expense of the tourists.

But back at the lodge that evening, I was speaking to Rex, Vuyani’s always smiling night guard. He asked what animals we had seen that day and I said, “Lions, rhinos, baboons, a honey badger…”

“Honey badger,” he interrupted. “Watch out for honey badgers! They will bite you on the balls!”

He then told me how a honey badger had found its way to the lodge about a year earlier. It began to get aggressive with some guests, so he attempted to shoo it away from the guest quarters. It turned on him, so he attempted to stomp on it, but it clamped its ugly yellow teeth into his boot. He jumped away and the honey badger came after him, so he did what any rational person would do.

He jumped into a nearby tree and held on for dear life. (I’m trying to get Rex’ photo of this incident, because it’s pretty funny. I’ll post it if it comes my way.) UPDATE: Here’s the photo of Rex climbing up a tree to escape the honey badger. 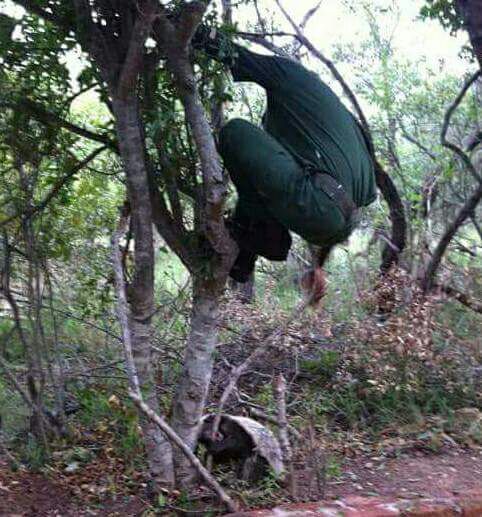 Damn it, I just looked in my suitcase and it appears that Jamie did not pack my codpiece. How is a man supposed to go on safari and face the dreaded honey badger without his codpiece?