When I was a teenager, I spent about 18 hours a day listening to KMEN 129, a great radio station in my hometown. I still remember the two request line phone numbers: Turner 8-1290 in San Bernardino and Overland 6-1291 in Riverside.

Here it is 50 years later and I’m still pals with Chuck. He sent me an email the other day telling me how much he loves JimandJamie.com, but requested that I post more food items.

Happy to do it, Chuck. You took a lot of my requests when I called Turner 8-1290 as a goofy teenager, so I’m happy to take your request now.

“And now here’s food item number one going out to Chuck in San Diego.” 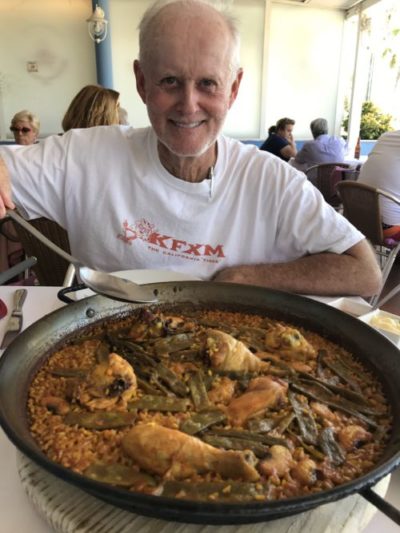 Jamie read that Valencia is the place to get the world’s best paella. So we took a taxi down to the beach and found two side-by-side restaurants that both claimed to make Valencia’s finest paella.

One of them was empty. The other one had a line out the door. We went along with the popular vote and waited to be seated.

The paella was everything that was promised. The traditional spicy combination of rice, chicken and rabbit was wonderful. Without knowing it was the thing to do, we both began picking at the crispy rice stuck to the inside edge of the pan. The waiter came over and nodded his head and in very broken English told us we were doing it right because the crispy rice is the very best part of paella. 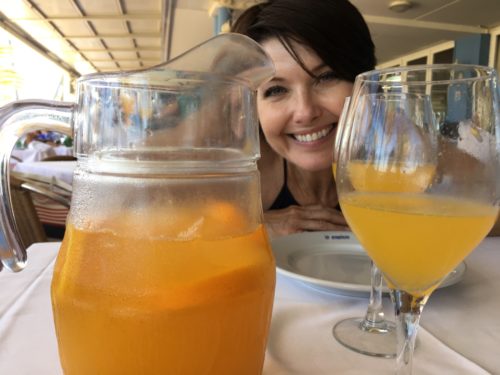 Of course, you can’t have paella at the beach without washing it down with sangria. In this case, a big pitcher of orange sangria.

All in all, a great way to spend a day at the beach.

UPDATE: I am mortified. In the photo of me and the pan of paella, I am wearing a T-shirt from KMEN’s duel-to-the-death competitor, KFXM. Horrible faux pas that I should be wearing that particular shirt in the story I write about Chuck Clemans. My apologies, Chuck.

UPDATE #2: Chuck sent along this photo of himself with 14-year old Jim, the third place winner in the KMEN Cake Baking Contest, with his Huckleberry Lookalike lemon cake. Looks like that boy should fatten up by eating some of that cake.