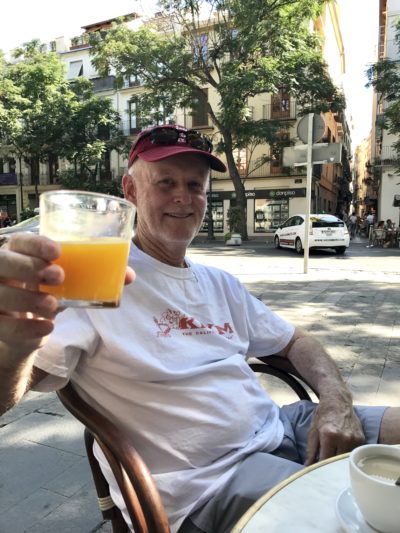 I think there is nothing more delicious than orange juice, especially the juice of Valencia oranges. It is the true nectar of the gods. So one of the reasons I was excited to visit Spain was to have the opportunity to sip orange juice made from Valencia oranges in Valencia.

Filled with eager anticipation, I sat down at a little cafe just outside the Mercado Central in old town Valencia. We ordered and a few minutes later the waiter delivered two glasses of the golden elixir to our table.

I sipped slowly and swirled it around in my mouth like a wine connoisseur tasting a rare Chardonnay.

It was everything I’d ever hoped for. Sweet. Pulpy. Delicious.

Then I thought to myself, Maybe I should look for some interesting facts about Valencia oranges that I can slip into this post.

I did, in fact, learn some very interesting things about Valencia oranges, but in this case it might be more appropriate to call them very surprising things. Maybe even embarrassing things. For example:

Wolfskill…named it for Valencia, Spain, which had a reputation for its sweet orange trees.

Before his death in 1866, Wolfskill sold his patented Valencia hybrid to the Irvine Ranch owners, who planted nearly half their lands to its cultivation. The success of this crop in Southern California led to the naming of Valencia, California.

We just traveled halfway around the world to Spain because I wanted to sip the juice of Valencia oranges in Valencia only to find out that those oranges were developed back home in Orange County, California, where I lived and worked the majority of my adult life.

This, my friends, is why research should be done before you travel.