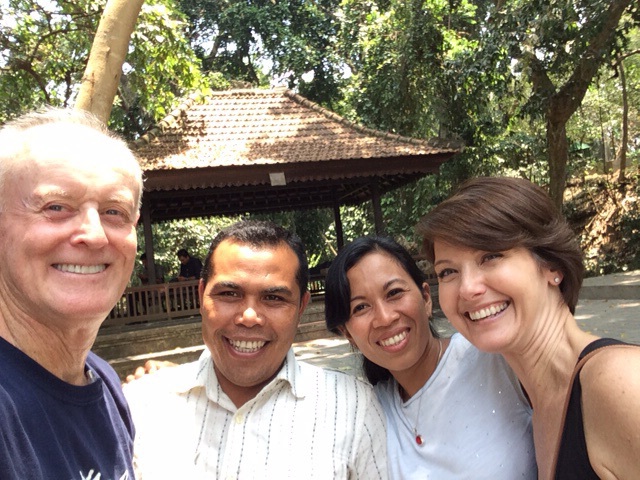 Everyone comments on the fact that the names Jim and Jamie are so similar, but that similarity pales in comparison to our new Balinese friend Budi and her husband Budi.

Yes, they have the same name, but for entirely different reasons.

Budi’s a long-time employee of the Komaneka at Tanggayuda Ubud, our hotel on Bali, and we struck up a conversation with her during dinner. Last night was a full moon, which makes it a major Hindu holiday, and one of the foods eaten at the festival is babi guling (suckling pig). She was shocked that we’d never eaten this porcine delight.

“Do you have plans tomorrow?” she asked. “My husband and I will take you to the best babi guling restaurant in Ubud.”

That invitation quickly evolved into much more. They picked us up at 10 a.m. and drove us all over town — to a great little restaurant for a traditional Balinese breakfast (Mmmmm, babi guling), to the Monkey Forest, to a shop where Jamie bought gifts for all our god daughters, all around the crazy busy town of Ubud — and then dropped us off back at the hotel. And, perhaps, most amazing, they did it out of the kindness of their hearts, not for money. (In fact, they refused to accept any cash when we tried to give it to them.)

Thanks, Budi. And thanks other Budi. Next time we’re visit Bali we’ll take you up on your invitation to visit your home and meet your family.

It’s wonderful people like you who make travel so much fun.