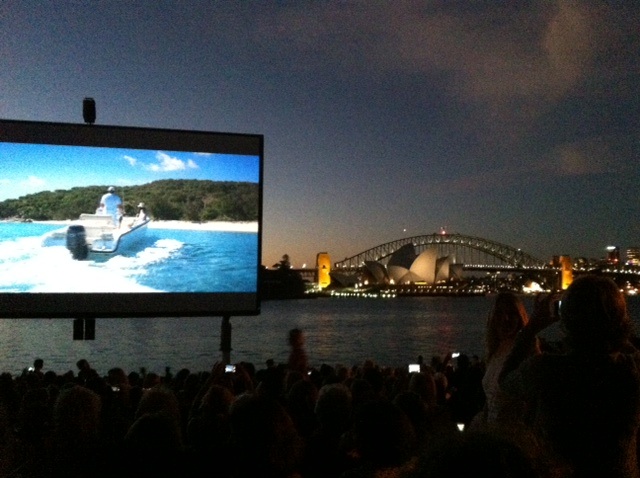 New York’s Central Park may be more famous, but Sydney’s Botanical Garden has to be the world’s most spectacular urban park. It runs right along the edge of the magnificent Sydney Harbour and overlooks the city’s twin icons — the Opera House and the Harbour Bridge.

We were walking from Woolloomooroo Wharf to the Opera House last night when we stumbled upon a grandstand filled with a thousand or so people way over on the eastern edge of the Garden. They were there to see an outdoor movie on a giant screen that had been erected at the edge of the water for the summer.

Since we’d already been to outdoor movies in Broome and in the Barossa Valley, we decided to come to a movie the following evening, our last night in Australia and the last night of this six month odyssey.

It was a warm, perfect summer evening. The movie was The Book Thief, but the setting made it difficult to keep our eyes on the screen. The Opera House and the Sydney Harbour Bridge sat across the shimmering waters of the harbour to the right of the screen, the city’s glowing skyline to the left. The moon began rising over the Opera House just after the movie began.