Our only goal here at JimandJamie.com is to share the fun we have traveling to unusual places and meeting unusual people. I always try to avoid politics like the plague they are.

That being said, there are times you can’t help but laugh about the subject.

We were here two years ago when Donald Trump first started making outrageous statements and winning primary elections. Aussies were absolutely dumbfounded by this development. It got to the point that Jamie and I started our mental stopwatches the moment we were introduced to someone — just to see how long it would take that person to repeat the same words so many other Aussies had said to us.

We both agreed that most folks could only carry on with smalltalk for about five minutes before they asked the question. We had lunch with friends of friends one day and I actually congratulated him for making it a full twenty minutes before asking.

Two years have passed and we’re back again and Trump is now the most powerful man in the world, but most Aussies (especially the ones in the media) have still not come to terms with it. We continue to get questions about Trump. The only difference is that the wording of the frequently asked question has now changed from “So what’s with Trump?” to “So what do you think of Trump?”

Jamie and I have developed a standard answer that immediately diffuses any potentially awkward political discussions. That answer is, “Hey, c’mon, you guys have no room to laugh at any other country’s politics.”

They all chuckle and look a bit embarrassed and say, “Yeah. You’re right about that.”

Here are some of the current reasons Aussies have no room to laugh at American politics: 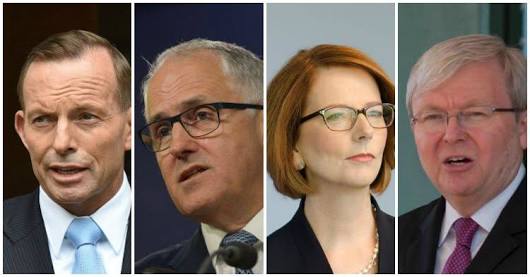 Five Prime Ministers in five years. At one point, as if it were some kind of third world banana republic, Australia went through five Prime Ministers in five years. And only a couple of them were elected by the people. They were, in order, Kevin Rudd, Julia Gillard, Rudd again, Tony Abbott, and Malcolm Turnbull. It’s even crazier than it sounds because three of them were booted out of office by their own parties. Rudd was voted in by the people, booted by his own party and replaced by Gillard who was, in turn, booted by the same party which then reinstalled Rudd. Confused yet? Think how the Aussies must feel.

Can you prove you’re Australian? Members of the Australian Parliament are not allowed to have dual citizenship. In fact, they are required to sign a document attesting to the fact that they are citizens only of Australia. Seems simple and straightforward, doesn’t it. Well, apparently not. Since 2016, nine of the 76 members of the Aussie Senate have been forced to resign after it was discovered they held dual citizenship despite those signed affidavits. Crazy, huh?

Bill Clinton was an amateur. Australia’s second-in-command has the title of Deputy Prime Minister. The job is roughly analagous to the job of the American Vice President. It was just discovered that the current Deputy, Barnaby Joyce, has a very much younger, very much pregnant girlfriend, which came as extremely distressing news to his current wife and three daughters. But it gets worse. The girlfriend was a paid advisor on his staff. But it gets worse. It just came out that Joyce tried to hide the pregnant girlfriend by shifting her from his payroll into an even better paying job in another governmental department. In other words, she’s being rewarded with taxpayer dollars. But it gets worse. Joyce moved her into a home donated by a major campaign contributor. But it gets worse. When Joyce’s wife booted him out of the family home, he moved in with the girlfriend — into the house owned by that major campaign contributor. But it gets worse. At the same time that this guy is barely clinging to political survival,  the Prime Minister heads this week to the United States to meet with Trump. Under normal circumstances, Joyce would serve as the acting Prime Minister, but that’s obviously impossible while this scandal is in the process of boiling over. So Joyce has had to take a week’s vacation while the Prime Minister is out of the country. At this point, I’m not sure if anyone knows who the acting PM will be next week.

So how about that Trump?