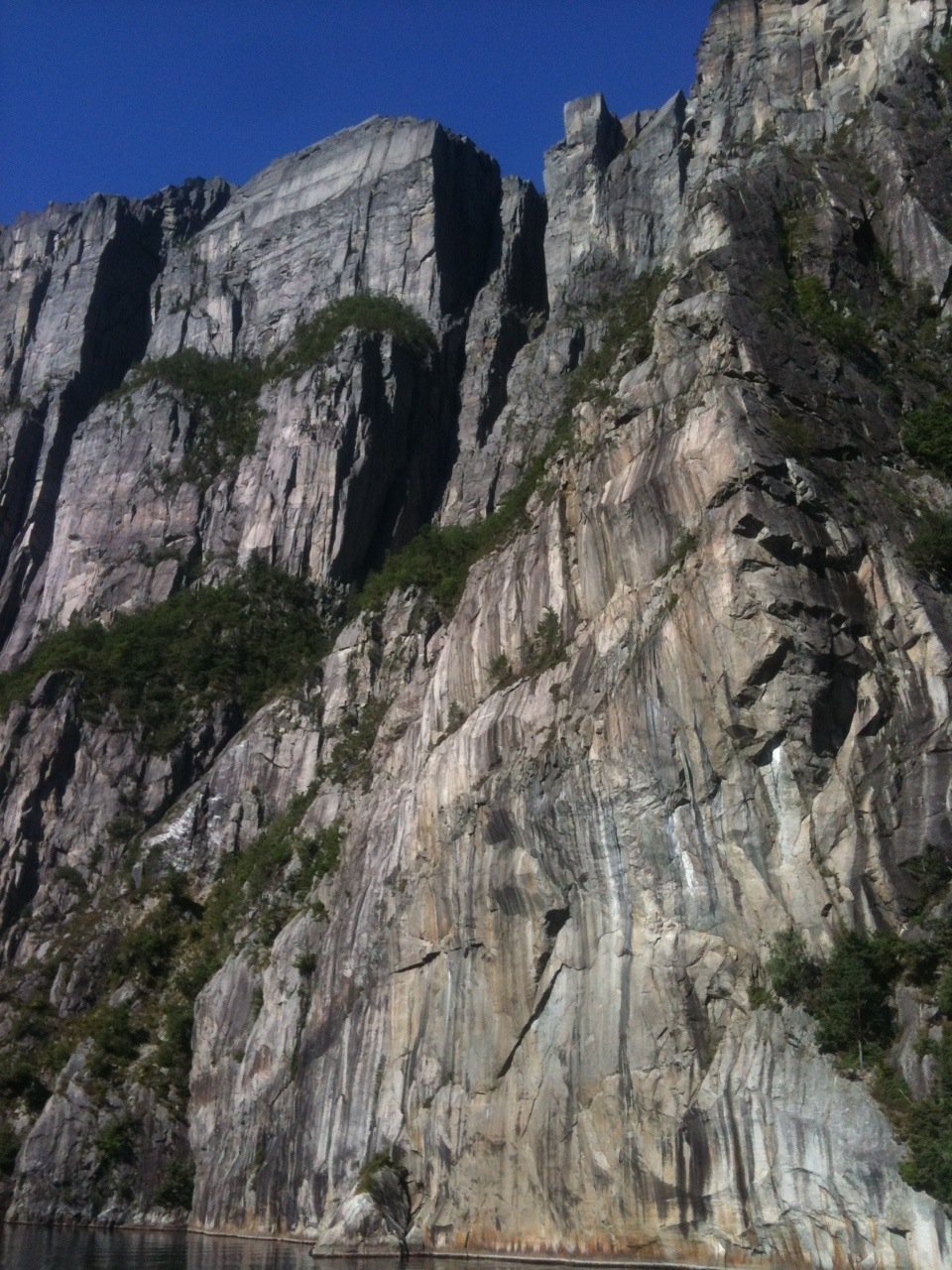 Our original itinerary had us flying directly from Reykjavik to Oslo, Norway. But Jamie ran across a description of Pulpit Rock and wanted to see it. We changed the itinerary and flew to Bergen, on Norway’s west coast, and then took the Speed Ferry down to Stavanger, the departure point for trips to Pulpit Rock.

Pulpit Rock is one of the most famous tourist attractions in Norway. It stands about 1000 feet above the Lysefjord. The Pulpit is a flat section that juts out from the adjacent cliff. It’s square, measuring about 80 feet by 80 feet, and nearly flat.

Jamie took this photo from the base of the vertical cliff that juts up out of Lysefjord. You can’t miss Pulpit rock at the top of this photo. It’s the tiny square section of rock jutting out just right of center. This photo from a thousand feet away is as close as we got.

A couple years ago Jamie was skipping with the kids at school when she felt an incredible pain in her left leg. As Vin Scully would say, “She went down like she got shot.” The doctor told her that she should take it easy because she had pulled a muscle. Jamie’s tougher than she looks. The pain persisted so a year later she went to another doctor who suspected that she had a blood clot. When an ultrasound showed she didn’t, he told her to take a yoga class and stretch it out.

We have a good friend (Hi, Jan) who damn near died after getting a blood clot in her leg while flying. That thought nagged at Jamie and she worried about having the same problem on this trip so she went to our family doctor. He had an MRI done and called one night to tell her that her Achilles’ tendon was 2/3 torn and that she needed to see an orthopedic surgeon immediately.

There must be a lot of people with orthopedic problems in San Luis Obispo, because she couldn’t get an appointment with any of them. Eventually one doctor’s front office person said, “Call us early every morning in case we have a cancellation.”

A week or so later she was able to see an outstanding doctor. He looked at the same MRI and said, “Nothing wrong here. Just an old injury that’s healed and left lots of scar tissue. Get some physical therapy.”

“But I’m leaving on a trip around the world next week.”

“In that case, be careful. Don’t do anything too strenuous. You’ll be fine.”

That explains why we’re not hiking up to Pulpit Rock. And since I’m openly terrified of heights, I completely agree with the doctor’s diagnosis.