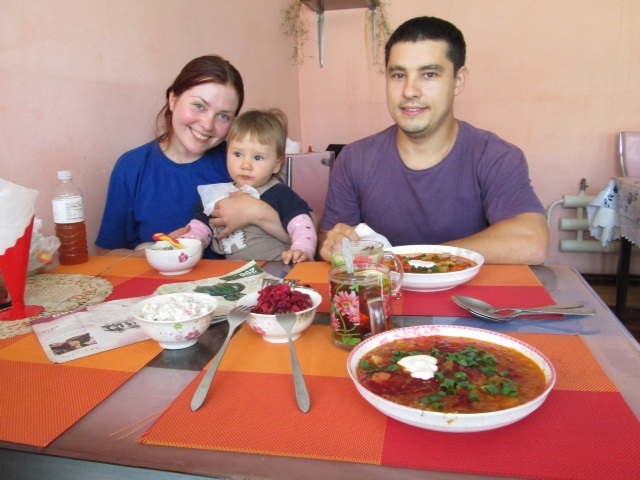 The train has been very different since Denise and Lars and several other couples disembarked in Irkutsk. Everyone on our car used to keep their compartment doors open and greet each other and talk in the aisle. The new people aboard the train keep their doors closed and don’t speak at all.

This morning I noticed a young dad playing with his toddler daughter at the end of the car. I spoke to him little later as he walked past our door.

“Do you speak English?”

“Your daughter is beautiful.”

That was the extent of our conversation. A little later they were at the end of the aisle again and I tried to get the little girl to wave to me. She wouldn’t.

Later this morning Rustam told us we would be stopping at Zabaykalsk, the next station, for seven hours. Thirty minutes before we arrived a young woman stopped at our door and asked — in a perfect British accent — if we knew anything about Zabaykalsk.

At first we both thought she was asking us for advice, but it turns out she was was offering to show us around town and take us to lunch. She was also the mother of the beautiful little girl.

The young couple, Irina and Evgeny, and their little girl, Sophie, are Russian. He’s 30, she’s 28 and Sophie is 18 months old. Irina was a teacher before Sophie was born and seemed pleased to learn that she had a British accent. Evgeny owns a company in China that sells mining equipment.

They took us out of the station and down the street to a local restaurant to treat us to an authentic Russian lunch. Jamie kept her composure, but I’m pretty sure she was freaking out on the inside and wondering if these people were really members of the Russian mafia intent on kidnapping her and selling her into a life of sex slavery. (UPDATE: Jamie just read this entry and said, “Yes, I was freaking out on the inside.)

Lunch was great. Sure, there were huge flies constantly circling and occasionally landing on our food, but this is an adventure, damn it, an adventure. We had two soups (including borscht), several salads (beet, potato, and cabbage), meat balls boiled in a doughy pastry, and tea. And, of course, we had conversation.

Irene and Eugene both grew up in Chita, Russia, which was a station we stopped at late last night. He got a degree in petrochemical engineering in Beijing and they lived there for three years, but hated the smog and congestion in the big city so they moved to a smaller town on the Yellow Sea. Now they’re on their way back home to China after taking Sophie to meet all four of her Russian grandparents for the first time.

They told us Zabaykalsk is a town full of very prosperous people, but holy freakin’ moly, it looks just like Tijuana. There’s a big project right outside the railway station and, to repeat the question Jamie asked several days ago, are they putting it up or tearing it down? Really tough to tell.

We went to the drug store with our new friends and they bought us a small bottle of tasty, healthy pomegranate drink. I think it was intended as a show of friendship, but Jamie and I are looking pretty rough after five days without showers, so they may have thought we both needed a little pick-me-up.

Lunch was delicious and they were warm and welcoming. Meeting new, interesting people really is the best part of traveling.

The counterpart of that, I guess, is that new, interesting people get to meet us. Evgeny stopped on the street to get directions from a group of people. He told us later that they had asked if we were Americans and wanted to know if they could have their photos taken with us. We would have been happy to do it had he told us at the time, but we wondered how they knew we were Americans since we hadn’t spoken. Irina laughed and said our appearance screams, “American!” She didn’t (or perhaps, wouldn’t) elaborate. We’re looking around the waiting room here at the train station trying to figure out what might set us apart and the only visual clue we can figure out is that we’re both wearing baseball caps, but no one else is. Guess this will just remain another one of those unsolved mysteries.