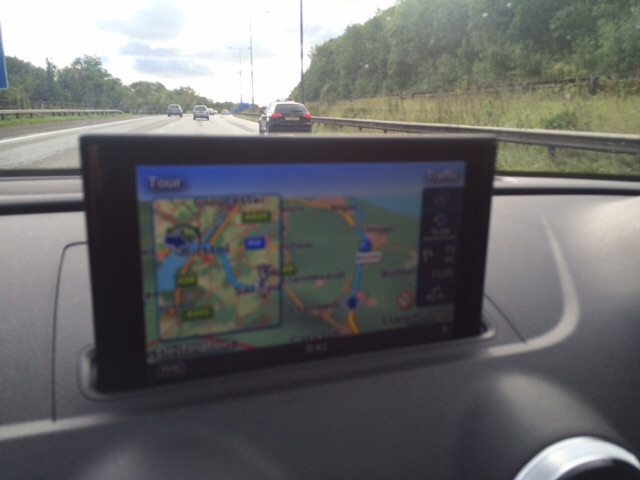 We rented a car from Hertz at Heathrow airport. There were no other customers in line and we got to laughing and scratching with the hilarious Scottish rental agent behind the counter. Next thing we knew she looked conspiratorially over each shoulder, leaned in toward us, and quietly said, “I’m giving you a really good car. I think it has GPS.”

We thanked her, took the keys, and walked out to Space 56 to find our car. It was a beautiful new Audi with almost no miles on the odometer, but when we climbed in Jamie said, “Hey, where’s the GPS?”

“There’s no screen on the dashboard,” I weighed in, “so she must have been wrong about the GPS. Oh, well, at least we got a brand new car.”

To make a long story short, we’ve been unintentionally exploring every nook and cranny of Southwest England for the last ten days. We’ve seen enough one-lane dirt roads to last us a lifetime.

Today, our last day in the United Kingdom, we were driving from Cardiff, Wales to Stonehenge, a drive that covers a lot of twisting and turning backroads that intersect at strange angles and suffer from a distinct lack of signage.

We were on the day’s one short stretch of major highway when Jamie said, “I wonder what this button does” and pushed a big knob in the middle of the center console.

As if by magic a slot opened on top of the dashboard, just below the rearview mirror, and a GPS screen rose as if by magic.

Sure wish one of us had pushed that button ten days ago.