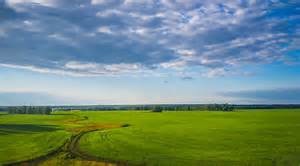 There’s one thing you can say for Siberia: There’s a lot of it.

It covers more than  million square miles. Russia’s by far the largest nation on earth and Siberia accounts for nearly 80% of its territory. In fact, almost 10% of Earth’s land surface is Siberia.

That being said, I realize that we’re not seeing much of it from the train and that railroad tracks are usually laid on the flattest ground possible. So that being said, I assume that Siberia may well have towering mountains and deep canyons that we’ll neer see.

Nevertheless, we are now well into our third day on the train and the scenery varies very slowly.

The first day was all forest. Hundreds and hundreds of miles of forest. The second day was also forest, but a bit more of it had been cleared away for farms. Here on the third day the ratio of farmland to forest has reversed so that there’s more farmland than forest, but other than that the landscape remains the same.

Mile after mile after mile of land that’s flatter than yesterday’s Coke. It’s really quite pretty, like the slightly undulating hills of eastern Montana, but far greener with more water and trees.

I’m sure someone who’s familiar with the territory would recognize landmarks, but to a stranger it all looks the same.