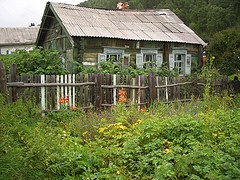 I often refer to my position in life as “slum lord”. Trust me, the rental houses I own in San Bernardino are like Peter the Great’s Summer Palace compared to the average house we see as we roll through Siberia.

Most of the houses are ramshackle hovels. They’re made of rough logs, unfinished boards, irregular chunks of plywood and misshapen pieces of corrugated tin. Many of their roofs are falling in. Interestingly, no matter how awful the condition of the houses may be, many owners give them colorful paint jobs or add bright, decorative shutters to the windows. Electric blue seems to be the color of choice.

The people appear to be desperately poor. We often wonder how they eke out their livings here in the middle of nowhere. As I’m writing this, Jamie said, “Half the time I can’t tell if they’re putting something up or tearing something down.”

It appears that all the Soviet-era buildings are falling down. Every town seems to have a couple large red brick or concrete factories that have been abandoned and are in various stages of decay.

I’ve tried to take photos from the train to show what I mean, but none of them ever look as poor as the reality. Trust me, reality is worse than this photo indicates.

If our Ginsberg godchildren are reading this, get down and kiss the ground and thank god that your great grandparents escaped from Russia and made it to America.
_________________________