No, we are not in New Zealand. But Jamie’s a little under the weather this week and things are slow between Christmas and New Years, so I’m reliving a few tales of travel past that have never been told on JimandJamie.com:

Psychological professionals might observe my behavior and say I suffer from an obsessive compulsive disorder. I prefer the term delightfully eccentric.

Take ferries, for example. I will detour many miles out of my way just to ride on one. Nothing makes me happier than finding a ferry that can transport me and my car across a body of water, no matter how short the ride. When we lived in Southern California I veered off Pacific Coast Hiway several times a month just to ride the ferry 1000 feet from Balboa Island to the Balboa Peninsula.

If you’re unfamiliar with Balboa, you might assume that I was taking a shortcut that saved a considerable amount of time. In reality, just the opposite is true. It takes about five minutes to drive the long way from the island to the peninsula, but the ferry takes considerably longer, especially there is a line or if you show up just as it departs from your side of the channel.

No, time had nothing to do with it. I just plain like the smell and feel and the romantic notion of ferries.

That’s why we’ve ridden them nearly everywhere we’ve traveled. Never once has Jamie complained about the time lost nor the gas wasted on my wayward waterway excursions.

Well, that’s not entirely accurate. There was that one time she complained. Rather vociferously, if my recall is anywhere near accurate.

Seat yourself in wayback machine’s shotgun seat and we’ll set the clock for 1997 and the longitudinal and latitudinal coordinates for the northern end of New Zealand’s north island: 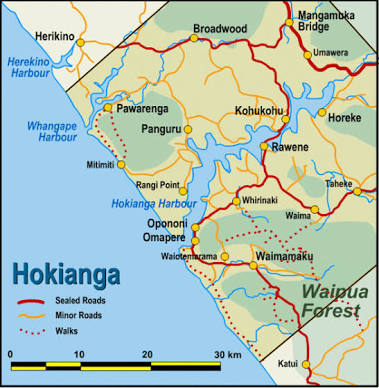 It was late Spring and we had just visited Cape Reinga, the very northernmost tip of New Zealand’s north island, and were driving south toward Auckland. We passed through a small town named Kaitaia when I noticed that we were getting a little low on gas. “No problem,” I said to Jamie, “we’ll just fill up at the next town we come to.”

It was late in the day and unbeknownst to me, our gas gauge was already engaged in a mano a mano duel with the sun to see which one could sink below the horizon first.

Sunset came and went and our long day finally caught up with Jamie. She fell asleep.

A few moments after she closed her eyes, I spotted a battered, wooden roadsign that said, “Hokianga Ferry” with an arrow that pointed off the main highway and onto a narrow country lane.

Well, I thought, there will surely be a gas station somewhere near the ferry. And I don’t know where Hokianga is, but it’s a ferry! I love ferries!

So I veered off the highway at about the same time that full darkness descended on northern New Zealand.

What kind of moron turns off the main highway onto an unlighted country road when it is dark and his gas tank is nearly empty. (Please note that the prior sentence was in the form of a rhetorical question.)

It was pitch black. No moon. No street lights. No towns. No villages. No farm lights. No neon sign up ahead indicating the presence of a gas station. No lights of any kind except the lonely headlights leading the way down the narrow country road in front of me.

By the time Jamie slowly roused from her nap, I was sweating. It was cold outside, but I was drenched in perspiration because the pointer on our gas gauge was rapidly racing toward the empty mark. I knew we were perilously low on petrol and I didn’t know where we were, but I knew I was unlikely to find any gas stations in this isolated area.

“Where are we?” Jamie yawned.

“We’re getting really close to a small town,” I assured her. “We’ll get a hotel room, spend the night and then we can take the ferry across the channel in the morning.”

“Well, I’m not really sure,” I admitted, “but I’m sure we’ll come to a motel in the next few miles.”

“Hmmmmmmm,” is what she said, but “You don’t know where we are and we’re going to run out of gas out here in the middle of nowhere, you freakin’ moron” is what I heard.

And I must admit that what I heard was a pretty good analysis of our situation.

It was past 10 o’clock and were literally running on fumes when we pulled into a little town whose name I no longer remember. We stopped at the first motel sign we spotted, but the sign out front said “No Vacancies.” I went inside to ask where the next motel could be found.

“Your best bet is the hotel,” the owner said. “Just keep going down this road and turn right at the corner. You can’t miss it.”

Before I go any further I should explain to American readers that the word “hotel” has a very different meaning in Australia and New Zealand than it does in the United States. Americans think of a hotel as a multistory building housing dozens or even hundreds of rooms, with a lovely reception area, and a restaurant, maybe even a number of restaurants. Not so in the Antipodes. Down here a hotel is a pub that may have a couple rooms upstairs or out back. But some hotels may be all pub, no rooms.

This particular hotel appeared to be the latter. I walked into the jampacked pub, worked my way to the bar through the raucous customers, and asked the publican if any rooms were available. He gave me a what-the-hell-are-you-doing-here look, and gruffly, almost angrily, assured me that he had a very nice room upstairs and that we were very lucky to find it still available at this time of night.

“My girlfriend is out in the car,” I told him. “Where should we bring our bags?”

“Right here into the pub,” he growled. “I’ll take you up to your room.”

It’s an exaggeration to call this little community a town. Even describing it as a village would be an overstatement. There were just a small handful of darkened shops surrounding the pub and a scattering of lights hinting that a few farms or homes might be tucked away in the hills surrounding this isolated bit of civilization. I tell you this so that you realize that every male resident within twenty miles must have been in the pub that night. And they had been there for a while, if you know what I mean. And in case you don’t know what I mean, I mean that they were all drunk or well on their way to achieving that condition.

I went back and fetched Jamie, incredibly relieved that we had made it this far without running out of gas, but incredibly concerned about what my irrational love of ferries had gotten us into. I was also careful not to mention that the room I had rented cost a mere $28. No reason to bother the woman with unimportant details, I decided. We grabbed our suitcases and headed into the pub.

Have you ever been to Disneyland’s Haunted Mansion? If so, you’ve undoubtedly seen the eerie statue whose eyes follow you wherever you go. That’s exactly what it felt like as we entered the pub and every inebriated head in the house turned and watched our every move as we wheeled our suitcases through the crowded pub.

Well, it can’t get any worse than this, I thought. But that proved to be an incorrect assumption as soon as the bartender opened the door of our room. The room was barely big enough to hold one small bed and our two suitcases. A bare lightbulb hung from an electrical cable that dangled haphazardly out of the ceiling. Our bathroom, just as small and dirty as we had feared, was across the hall and it was to be shared by all the hotel’s guests. (By the grace of God, we were the hotel’s only guests that night, so that was not an issue.)

We quickly washed up, brushed our teeth, and climbed into the small, rickety bed. It sagged so badly that Jamie and I immediately rolled inward and smacked into each other mid-mattress. Even she had to laugh at our predicament.

We slept a restless, fitful sleep and woke up in the morning wondering how the next chapter of this story would unfold.

Just then the publican gently knocked on our door and politely asked us what time we would like breakfast.

Seriously? Breakfast? We were to get lodging and breakfast for our twenty-eight New Zealand dollars? We couldn’t wait to see what kind of horrible meal awaited us downstairs.

We carefully picked our way down the squeaking stairs and found the publican cooking breakfast. He invited us to sit down at the kitchen table and to have some fresh baked bread and farmfresh butter with our tea and coffee while he finished preparing our morning meal.

The publican delivered our plates, heaped high with what’s known in this neck of the woods as a “big brekky,” and sat down with us. Turns out he was new to the publican business. He had been a government official in Auckland for thirty years until he retired, bought the pub, and moved north with his wife.

He apologized, saying that he feared his demeanor may have sounded a bit gruff the night before, and explained that he had been having a difficult evening dealing with unruly drunks and that renting a room was the last thing on his mind. The publican and his wife could not have been nicer, warmer, more welcoming people. And the breakfast he prepared was delicious.

While we finished off our big brekkies, the publican brought our bags downstairs. Then we took photos, told them what a wonderful, interesting experience it had been, and climbed into our car.

“Oh, just one more question,” I said before putting the car in gear. “Where’s the nearest petrol station?”

“No petrol stations here,” the publican said. “But you’ll find one on the other side of the harbor as soon as you get off the ferry.” 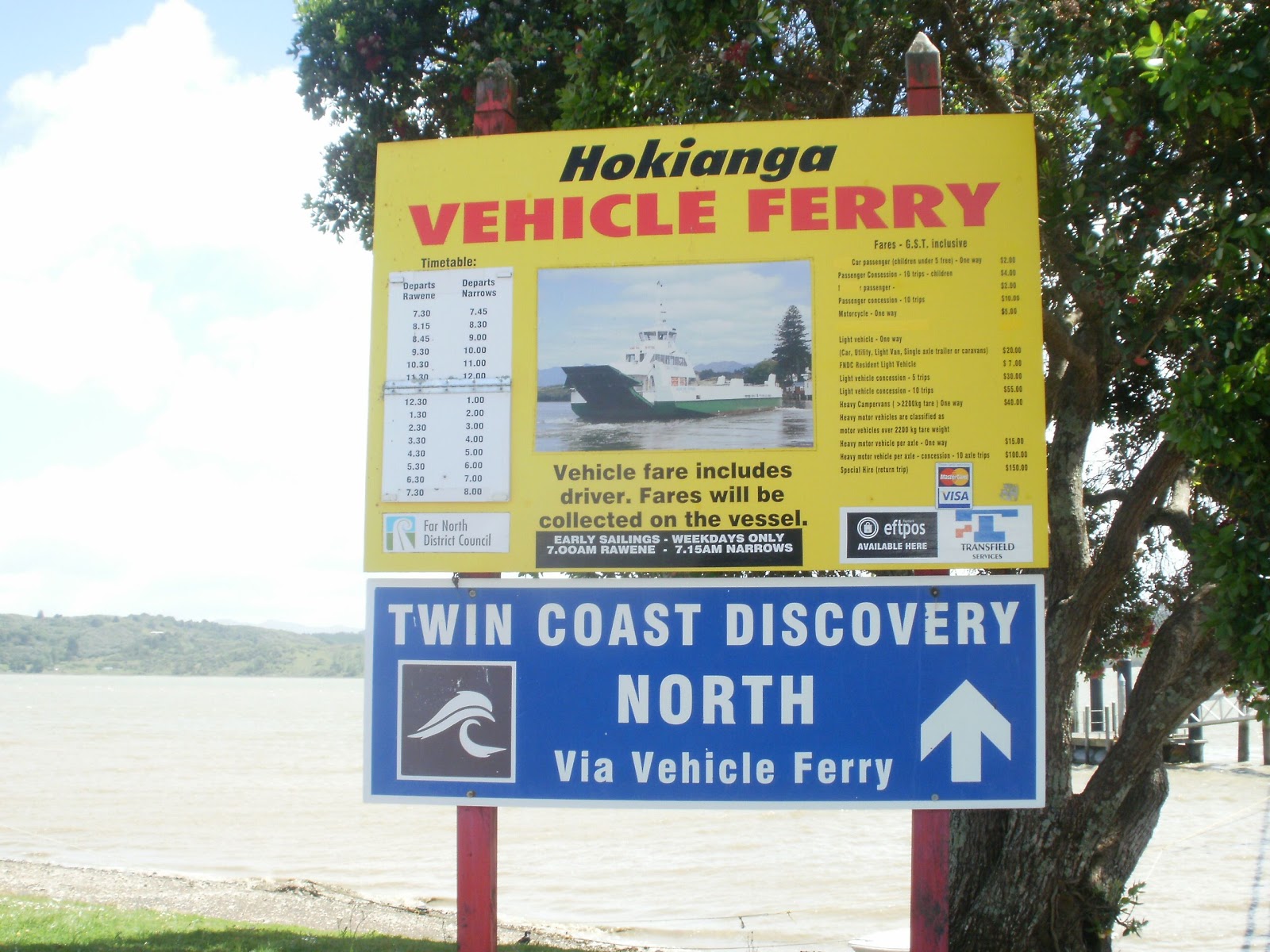 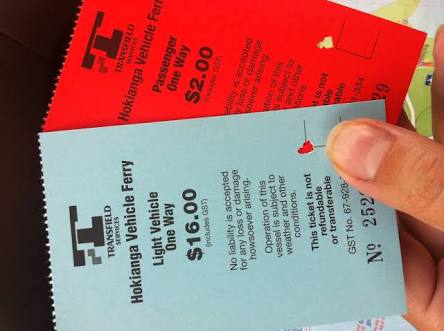 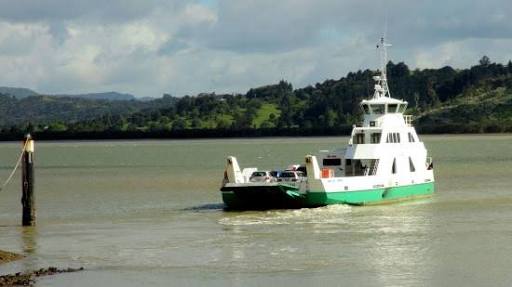 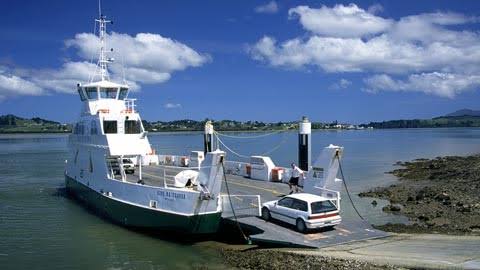 Of course, that was dependent on our tank still containing enough droplets of gasoline to get to the ferry and then getting to the gas station on the other side. If sweat were gasoline, I could have filled the tank.

Luckily, we made it to the ferry, rode it across the Hokianga Harbour, drove up the ramp on the other side, and rolled into the petrol station just as our car digested the last of our fuel. Feeling an incredible sense of relief, I filled the tank, paid the attendant, and climbed behind the wheel again.

Maybe so. But as I said earlier, I prefer the term delightfully eccentric.