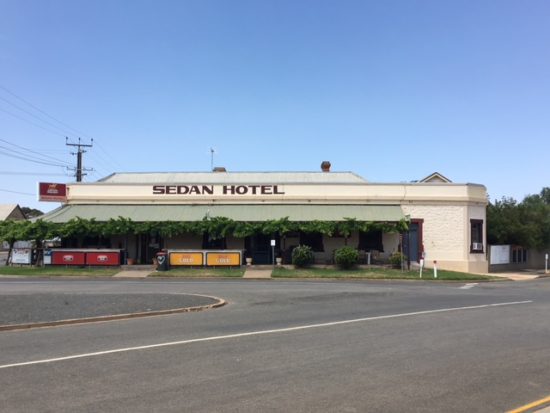 I wrote about our friend, Dr. John Rutter, in an earlier post. But you really need to know more about him, because he’s led an incredibly interesting life and practiced medicine in an era that no longer exists.

In addition to seeing patients in his Angaston office, John periodically tended to those who needed his services in smaller outlying towns. Calling them towns may be a bit of an exaggeration, because some of them were mere crossroads with a pub and a home or two.

No matter. John went where he was needed.

For example, once a month he traveled to Sedan, one of those crossroad communities. Today Angaston and Sedan are separated by a lovely country road. But back in the early days of John’s practice, getting from one to the other was an ordeal — 18 miles down a dirt road filled with deep, washboard ruts and even deeper potholes. Although the temperatures often soared to 100 degrees and higher, the cars in that era had no air conditioning, so John’s windows had to be rolled down even when the air was filled with thick clouds of sticky red dust that ran to the horizon and beyond.

By this time, you may wonder what the photo at the top of this story has to do with John’s trek to Sedan. Well, believe it or not, there was no medical office in the area, so John saw patients in the hotel dining room.

We were driving around with John and Margaret one day when we stopped at the grocery store in Sedan. He pointed across the street to the the hotel.

“The worst,” he said, “was when I had to perform a sigmoidoscopy on the dining room table.”

(If you are unfamiliar with the procedure, just click on the word to get its horrifying definition.)

“And then,” he finished, “they served lunch on the same table.”

Medical duties completed, John drove back to Angaston on the same dusty, rutted road. But on the way, he had to keep an eye out for handkerchiefs hanging on farm fence posts. When he saw a white one, it indicated that the residents needed his services. When he saw a red one, it meant the need was critical.

There were many times that he accepted a live chicken or goose in exchange for his services.

UPDATE: I mentioned a sigmoidoscopy in the story above. In case you are unfamiliar with this barbaric medical procedure, allow yourself the pleasure of hearing it described by comedian Dennis Wolfberg. I remember hearing this routine on the radio sometime in the late 70s and laughing so hard that I had to pull off the freeway until it was over. Dennis was one of my favorite standup comics in the 70s and 80s and left us far too soon.