I’ve never before re-run a story from any of our previous travels, but this may be my all-time favorite story and we’re back in Broome where it happened, so what the hell. Here you go: 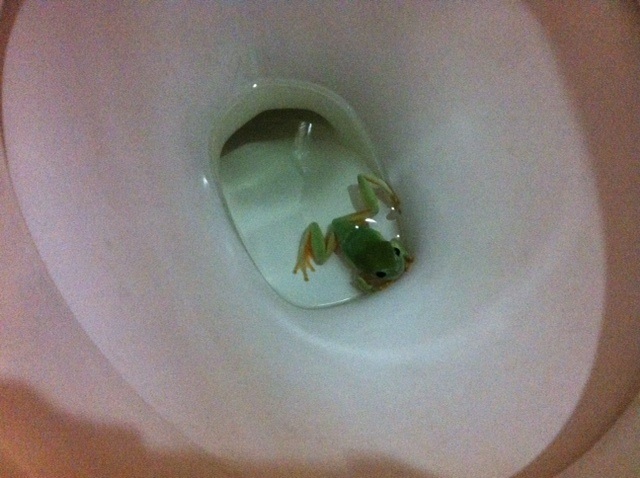 There’s a frog in our toilet in Broome, Western Australia. I’ve tried to get him out, but he’s a clever little bugger and always manages to climb into an inaccessible little crevice where I can’t reach him.

We’re staying in a wonderful resort hotel called the Bali Hai. We stayed here five years ago and one of the reasons we came back is because we loved the outdoor bathroom that came with our room.

Now don’t get the wrong idea. It’s not an outhouse. It’s very cool. We’re in the tropics here and the toilet and shower are outdoors, accessible only through a door from our room, so we can shower out in the warm, inviting tropical breezes. And, of course, the fact that the toilet is outdoors also makes it easier to understand how and why a frog has taken up residence in it.

But let’s pause briefly for a little back story:

Terry Deal, one of the first people we met in San Luis Obispo, is a demented son of a bitch, which may explain why he married Sandy, a psychologist. Being married to Terry must be like living in a case study for her.

A dozen or so years ago, before we moved into our new home, Terry was telling Jamie all the things she would enjoy about life in Edna Ranch. Then he said, “But there’s one thing you have to watch out for. Rats in the toilet.”

Jamie was horrified, which was exactly the reaction Terry wanted, so he continued.

“They climb up the sewer line into the toilets. So if you get up to go to the bathroom in the middle of the night, always turn the light on to make sure there’s not a rat in your toilet.”

Terry is a wonderful man, Jamie thought. I have immense respect for him. He wouldn’t make up something like that.

I, on the other hand, thought, Of course he would. He’s Terry Deal. Making crap up is one of his specialties. His ability to make the preposterous sound reasonable is one of the things I love about him.

Well, damn it, the woman has been turning on the light and waking me up in the middle of the night for twelve years now. I’ve told her that there are no rats in the toilet but she chooses to believe Terry because (a) He’s an esteemed educator and author, (b) He’s a doctor, and (c) He’s not her husband.

So that brings us back to the frog in the toilet in Broome, Western Australia.

Thanks to Terry Deal, Jamie is afraid to use the toilet. She’s fears that the frog will bite her on the butt. Or worse.