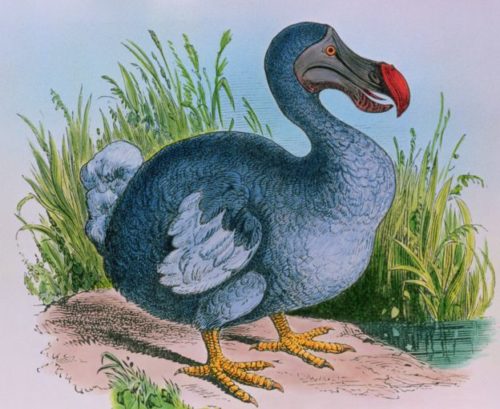 There are two phrases that reference dodos. Well, maybe there are more, but I’m only aware of two.

The first is “dumb as a dodo,” which indicates extreme stupidity, and the other is “Going the way of the dodo,” which means “to disappear or to go extinct.” The two sayings go hand-in-hand.

But do you know what a dodo is? Or, more accurately, was?

It’s an extinct flightless bird that was found on Mauritius, but nowhere else in the world.

It was a big bird — 3 feet tall and probably weighed nearly 40 pounds. Scientists think it had brownish-grey feathers, yellow feet, a tuft of tail feathers, a grey, naked head, and a black, yellow, and green beak.

But what about those dodo sayings?

Early sailors said dodos were fat and clumsy, and since they had no natural predators on Mauritius, they had no fear of these famished Europeans roaming their beaches. As a result, the naive dodos would walk right up to the sailors, who took the opportunity to club the trusting birds over the head to secure dinner for themselves and their shipmates. The sailors, probably no geniuses themselves, looked at the dodos’ repeated trusting behavior and said “These birds certainly aren’t very bright, are they?” Hence, the phrase “dumb as a dodo.”

The first European sighting of the dodo was in 1598. Far as they can tell, so many sailors clubbed so many dodos over the head that they were extinct by 1662. That gave the innocent Indian Ocean avian the unenviable title of first species whose extinction can be laid directly at the feet of humans. Hence, the phrase “going the way of the dodo.”

Rest assured, however, that the extinct dodo lives on in Mauritius in the form of carved, cast, printed, and embroidered namesakes created to separate tourists from their rupees.