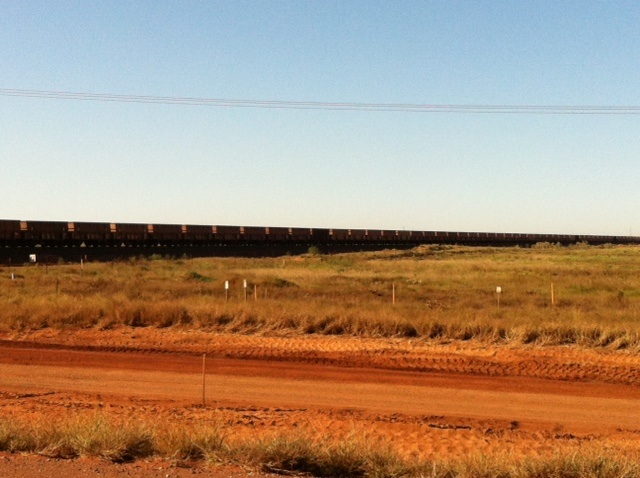 This is a photo we took as we were leaving Port Hedland, Western Australia. In case you can’t tell, there’s a long, long train going from left to right in the photo. It’s a nearly endless line of box cars heading inland to be filled at the region’s numerous mines.

I’ve had to handle some difficult advertising accounts in my career, companies that made products I didn’t believe in or products that were inferior to their competitors. In retrospect, those accounts were easy. The guy I pity is the poor son of a bitch who has to create advertising for the Port Hedland Tourism Board.

I’m sure the people who live here think it’s a nice little place, but they are wrong. They can only think that because they’ve never been anywhere else.

Let me back up a bit. You probably don’t know this, but Western Australia sits on the richest deposits of minerals on earth. Swing a pick in any direction and you’ll probably strike a vast deposit of gold or iron or nickel or diamonds or copper or coal or damn near any other valuable mineral you can think of.

The Chinese economy is booming, which has created a nearly insatiable appetite for Aussie minerals. Port Hedland exists, as far as I can tell, purely as a port to ship them to China.

We were driving along in the middle of nowhere, a hundred kilometers or so south of Port Hedland, when all of a sudden we came upon a huge Chinese-owned iron ore processing plant alongside the highway. The empty highway was suddenly filled with trucks. There were signs directing us to different mines and processing plants every few miles. There were clusters of manufactured homes to house the miners and related workers. We even read that the Chinese are building an entire port from scratch just to ship the minerals home.

So we spent the night in Port Hedland. I’m sure that the town existed before the mineral boom began, but I could not begin to explain why. And this opinion has nothing to do with the fact that our room, which was advertised as having a “ocean view” had, in reality, a view of some stinky mudflats. (Damn advertising guys.)

The town is crisscrossed by new roads and new power lines leading to new mines and new factories and new port facilities. It was all new and yet it sucked. Badly.

Let me make this perfectly clear: If you ever hear me say we’re going to Port Hedland on vacation, please put a bullet in my head. It would be considered an act of kindness and no court in the world would convict you.