My longtime business partner always used to warn me against overselling. That is, don’t tell your audience that what they are about to see is the greatest of its kind because it’s impossible for the reality to live up to the hype.

Well, screw that. Because what you are about to read is the best story ever.

I was reading an article on the internet the other day when I ran across someone whose last name was Ackland.

All of a sudden a long forgotten name popped into my head. A name I hadn’t thought of in forty seven years.

Here’s the back story:

On my first trip down under, right after I graduated from college, I thumbed my way around the country. One rainy afternoon I found myself hitchhiking on the main thoroughfare in Liverpool, one of Sydney’s southern suburbs, when the skies darkened and sheets of rain began pouring down. I found refuge in a nearby fish and chips shop while waiting for the skies to clear.

When it hadn’t cleared up after an hour or so, I began pondering my possibilities and wondering where I might spend the night. Just then I noticed an old, abandoned house sitting directly across the street. It looked like it hadn’t been painted in decades and its lawn was overgrown and mostly weeds. It was surrounded by the kind of wide veranda that grace so many Aussie houses.

That, I thought, would make a dandy, dry place to spread out my sleeping bag and spend the night. I gathered my meager possessions, paid my bill, and dashed across the busy intersection. Within moments I was setting myself up on that deserted veranda.

I was warm and cozy and growing increasingly drowsy when the wind shifted directions and rain began pelting me in my sleeping bag. I climbed out of the bag and went scouting around the exterior of the deserted house for a spot that was better protected from the elements. Out behind the main house I found a small shed. Its door was unlocked and the shed was warm and dry and empty and appeared to be exactly what I needed for the night. So I moved all my gear from the front veranda, closed the door behind me and again prepared for a cozy night’s sleep.

I had just slipped back into my sleeping bag and was again beginning to drift off when I heard a car turn off the street, roll up the gravel driveway, and come to a stop right outside the shed. I heard the car’s engine turn off, followed by the opening and closing of the driver’s door, and then a woman’s footsteps walking toward the house. I peered through the shed’s dusty window just in time to see her enter the house and close the door behind her. Then the house came ablaze with lights.

Hmmmmm, I thought, maybe this old house isn’t as abandoned as I thought.

I recalled the words of my favorite college professor who said, “Always confront a situation before it confronts you.” After giving it a few minutes thought, I once again rolled out of my sleeping bag, walked up to the back door of the house, and knocked. When the young woman opened the door I introduced myself.

”I’m hitchhiking around the country,” I told her. “I thought your house was abandoned and I was going to sleep in your shed to stay out of the rain. Is that ok with you?”

She was very nice. Instead of screaming and calling the police — the reaction I expected — she said, “Well, I suppose it’s alright.”

Situation resolved, I went back to the shed and climbed back into my sleeping bag. I was once again falling into the arms of Morpheus when another car rolled up the driveway. This time a man was driving. He also went into the house, but a few moments later I heard him come back outside and stride rapidly toward the shed. He began pounding on its rickety door.

Crap, I’m in trouble now, I thought. So I quickly wiggled out of my sleeping bag and opened the door to face my fate.

The man looked me in the eye and said, “You cannot sleep in our shed tonight.”

This is not going to end well, I thought.

”Come inside,” he continued, “and sleep in the house.”

That was my incredibly surprising introduction to Greg and Helen Acland. They graciously brought me into their home and invited me to join them for a warm, home cooked dinner. Greg carried my belongings to their guest bedroom and insisted that I sleep there for the night. And best of all, I was able to take a long, hot shower, a rare luxury in the world of hitchhiking.

Greg was a 26-year old veterinarian who had recently opened his first practice there in Liverpool. And it turns out that the Aclands had just completed remodeling the interior of what I thought was an old, abandoned house, and the exterior renovation was scheduled to begin the following week. 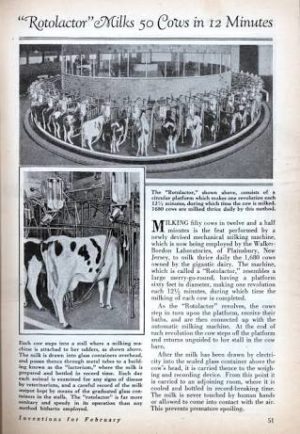 When Greg found out that I had grown up on a dairy farm, he quickly decided to take the next morning off work to show me a miracle of modern dairy science, Liverpool’s Rotolactor, a merry-go-round for cows that was designed to speed and improve the milking process. (As I recall, he told me this mechanical milking marvel had actually been an immense financial failure, but it was worthy of a sightseeing tour nonetheless.)

Greg and Helen Acland were absolutely wonderful people. They couldn’t have been any kinder nor any more generous.

Seriously. If you came home and found a long-haired, bearded stranger camped out in your backyard shed, would you invite him into your home, cook him dinner, and invite him to sleep in your newly remodeled guest room?

And that brings us back to last night. I read that online article that mentioned the last name “Ackland” and the Greg’s name popped into my head for the first time in forty-seven years.

I wondered what had happened to Greg and Helen, so I began Googling “Greg Ackland” and “Liverpool” and “Veterinarian.” Google failed me. I was unable to find any vets named Ackland in the Sydney area. The only promising lead was a research scientist at Cornell University in upstate New York, but that man spelled his name without the “k.”

After a frustrating hour or so the proverbial lightbulb went on over my head. “What if Google is trying to tell me that my spelling is incorrect,” I wondered.  “Maybe the correct spelling of Greg and Helen’s  last name is actually Acland, not Ackland?”

Within moments I learned that Liverpool’s Greg Acland had moved to the United States in the late 80s and had become one of the world’s leading experts in genetic canine vision problems.

But even that trail quickly turned cold because I could find no references to Greg after 2008. Had he died? Been imprisoned? Abducted by aliens?

Google told me that Greg had done much of his research with another vet named Gustavo Aguirre, now a Professor of Medical Genetics and Ophthalmology at the University of Pennsylvania.

I tracked down Gustavo’s email address at the university and sent him the following message:

I’m trying to track down Greg Acland. I can’t find any recent references to him on the internet, but I found many references to the two of you working together. So I’m reaching out to you to find out what has happened to Greg. I hope he’s still alive and doing well. If so, can you give me his contact information?

To tell the truth, I doubt that he will even remember me, but he was very kind to me when I was a young American hitchhiker traveling around Australia back in 1970. I haven’t thought of him for many years, but my wife and I are in Australia right now and his name suddenly popped into my head tonight.

I look forward to hearing back from you.

Much to my surprise, Dr Aguirre responded within a matter of minutes.

Jim – Greg is alive and kicking, and now retired from Cornell. His email address is: Greg Acland <gregacland@*******.com>

Unbelievable. What an incredible turn of events. However, it was late at night here in Australia, so I decided that I should wait until the following morning to contact Greg. I wasn’t sure what I was going to say to him and had very serious doubts that he would remember me no matter what I said.

Mere moments later my iPad dinged to let me know I had received an email. An email, if you can believe it, from the man himself, Dr. Greg Acland. I hadn’t noticed, but Gustavo had copied Greg when he replied to my email.

What a great surprise and pleasure to hear from you. Helen and I certainly remember you very clearly, even though your stay with us was so brief. I am very glad to hear that you are doing well, and I am sure that your current trip to Oz will bring back many memories.

Greg and I have now emailed back and forth several times. They now live in Kennett Square, Pennsylvania, about thirty miles outside of Philadelphia.

Although our current journey is not yet over, Jamie and I are already in the early stages of planning a Spring driving trip from McKinney, Texas to Middletown, Connecticut to visit our god children. Google Maps says Kennett Square is just a few miles off our route.

I told Greg and Helen that I would love to see them when we pass through town. It might be forty seven years late, but I think I owe them a dinner.