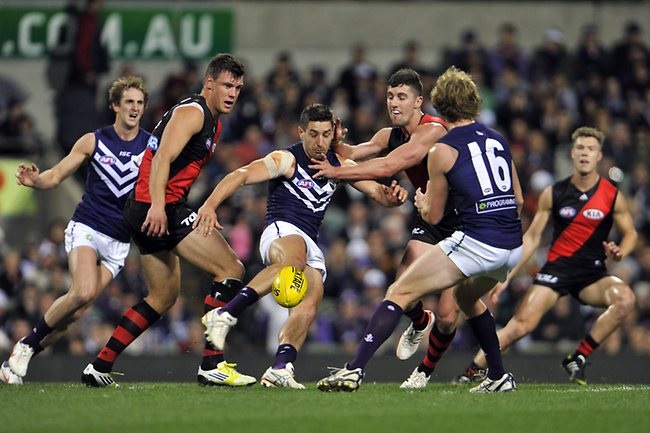 Tonight’s a huge night for Aussie rules football (known in the abbreviated Aussie venacular as “footy”) here in Perth. The Fremantle (known in the abbreviated Aussie venacular as “Freo”) Dockers are playing the Sydney Swans in the semi-final game. The game is being played in the Subiaco Oval and the winner goes on to face Hawthorn in the Grand Final, footy’s equivilant of the SuperBowl. The city’s very excited because the Dockers have never been in the Grand Final before and almost everyone in the city is wearing purple, the Swans’ color, to support the team.

So, you may ask, what is Aussie Rules Football? Damned if I can explain it. We attended an Adelaide Crows game a few years ago and Jamie always managed to stand up and scream at inappropriate moments. The other Crows fans kept looking at her like she was insane. I couldn’t blame her for cheering at the wrong moments because neither of us could tell a good play from a bad play.

We moved to San Luis Obispo immediately after that trip to Australia. She went out on a job interview and during her preliminary interview with the company’s human resources director she learned that Hamish Marshall, president of the company and the man she’d be working for, was from Adelaide. What are the odds?

I told her that if she really wanted the job she should jump up in the middle of the interview and do the Crows’ cheer. She said she absolutely wouldn’t.

She somehow got the job despite ignoring my outstanding advice and worked for Hamish for several years. Hamish and I became friends. One day at lunch I told him this story and asked him what he would have done if she had done as I suggested during the interview.