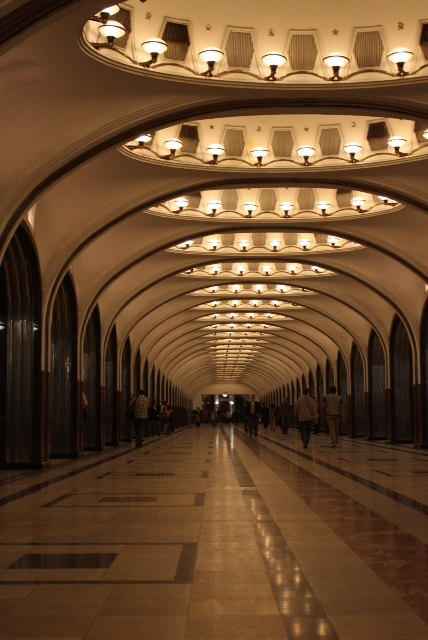 Russia’s subway stations are spectacular. No, really. If you’ve ever ridden a subway in any other city spectacular is probably the last word you’d ever apply to a subway station, but it’s fitting in this case.

They were built as works of art back in the 1930s. It’s one thing the Communists were apparently good at.

The concierge at the hotel recommended that we go off to see four or five of the more dazzling ones. We did, but not because we wanted to.

We started off on one side of Moscow, looked at the subway map and got immediately confused. “You’re on the brown line, so you take the blue line to the green line.” Yeah, sure, sounds easy but it wasn’t.

I’ve ridden on quite a few subways in my life and I’ve never been more confused. The cars aren’t numbered, they don’t have LEDs up front to tell you the destination, and instead of having big, bold names written on the station walls when trains come pulling in, the Moscow stations have nothing on the walls. ABSOLUTELY NOTHING, DAMN IT!

We went to the blue line, but couldn’t find the green line and ended up on the red line. Or did we find the green line, but couldn’t find the red line and ended up on the blue line? Don’t really know, don’t really care. Whatever, we got completely lost. It took us 90 minutes to get where we should have gotten in 15 minutes. But we did get a very nice, but unscheduled tours of some incredible stations.

Luckily, we ran into some very helpful Russians. One woman who was leading a tour group in the subway stations showed us where to go. Then a group of teenage boys told us where to get off the train. Then a young man took us right to the proper train. And finally, a nice young woman told us when to get off. Luckily, the station is right across the street from our hotel.

But back to the subway stations: They’re art deco architectural wonders, filled with paintings and intricate mosaics.

I’d like to claim we got lost in the art, but the simpler truth is that we were just plain lost.