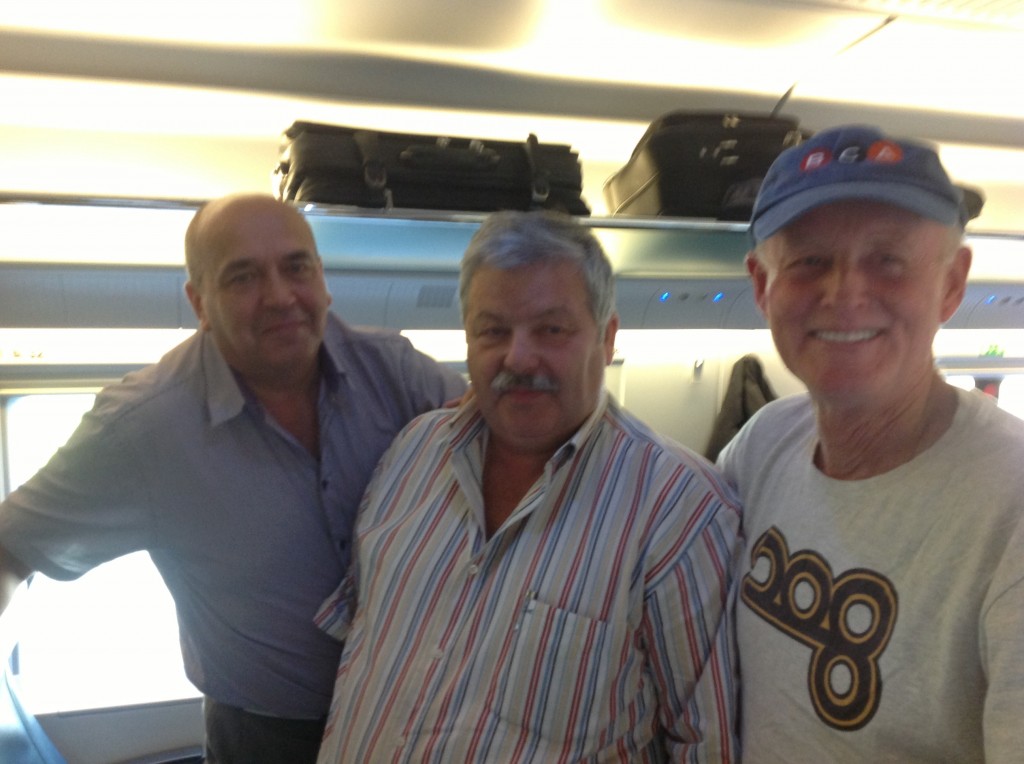 Vladimir, the man in the middle of this photo, is the one who titled it “The three amigos and the Crimean cognac”.

Those of you who know me well know that I rarely drink alcoholic beverages. I was never much of a drinker to begin with and pretty much avoid all alcohol since my bout with Lyme Disease.

With that in mind, you may find the following story hard to believe, but Jamie will verify the details.

We boarded the speed train from St Petersburg to Moscow at 1:30 pm and quickly found our seats near the back of the first class car. Seated directly across the aisle from us were two burly Russian men about my age. Like many of the other Russians aboard, they had numerous alcoholic beverages arrayed across their dining trays.

After a few minutes one of them leaned over to me and said, “Are you Americans?”

When we answered in the affirmative, he waved a bottle of liquor in my direction and said, “Would you like a drink?”

Before we left home, our Ukrainian friend Yulia had warned us not to allow a Russian to buy us a drink. “They’ll get insulted if you want to stop drinking before they do,” she said. “You may end up in a fight.”

Hmmm, I thought, this may be the situation Yulia warned us about. So I politely declined the man’s kind offer by saying that I have a medical condition that prohibits me from imbibing.

He shrugged and gave me a look that clearly said, You are a pathetic Yankee pussy. You are the son of a dog. The only people you insult worse than my people are your own people. I am ashamed to share this fine Russian train car with you and your kind.

At least that’s what I read into his shrug and look of disappointment. So I thought, what the hell. Let’s go for it.

The two Russians, my new best friends, were named Vladimir and Vasily. They proudly told me that their drink of choice was a 50-year old cognac produced in Crimea. And, of course, that also made it my drink of choice.

I usually don’t like the taste of alcohol, but this was good. It was smooth. I turned to Jamie and said, “This is the best alcohol I’ve ever had. It makes my stomach all warm and tingly.”

After I finished my first glass, Vladimir extended his hospitality and poured another round for the three of us. I liked the second one as much as the first.

I let Jamie have a sip, but I really didn’t want to. Let the bitch find her own Russian friends with 50-year old Crimean cognac.

Oh, my god. I can’t believe I said that. It must be the cognac speaking.