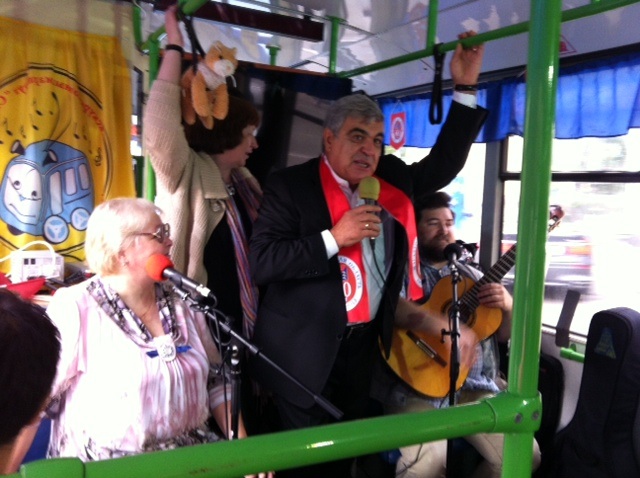 This was one very unusual day. The most unusual day of our trip. It started horribly, got strange and delightful, and ended nicely.

We’re boarding the Trans-Siberian Express tonight and will be aboard for the next seven nights. We brought along seven changes of clothing, so that means we needed to wash our clothes today.

Of course, we could have had the hotel send them to their laundry, but the price sheet said that washing one pair of socks costs $9. And that’s the cheapest thing on the price sheet. I am, after all, the son of a Dutch dairy farmer and I wouldn’t pay $9 to wash a pair of socks if I had a billion dollars in the bank.

So I got online and found the only laundromat in Moscow. It’s about a ten minute bus ride away. We went to the concierge and he told us where to catch the bus and even marked it on a map for us.

We then wandered around Moscow like Moses in the desert. Of course, he was lost for 40 years and we only were only lost for 40 minutes or so before we found the bus stop, but you understand what I mean.

When we finally found the bus stop and got aboard the bus just sat there. I pushed a handful of rubles toward the driver, but he pushed them back, shaking his head and saying something unintelligible in Russian. This sequence of events was repeated several times.

Finally a woman came over and in very broken English said, “This bus isn’t going anywhere because we’re filming.” We looked around and, sure enough, the area around the bus was taped off and a film crew was hard at work. The woman told us to get off the bus and go to the next bus stop.

While we were looking at our map and trying to figure out what to do next, she came over and said, “Where are you going? We’ll take you there.”

At first we thought we had misinterpreted her broken English, but no. She said the shoot was done at this location and if we got aboard the bus they would take us right to our destination.

We got aboard only to find a singer and a guitar player sitting in the front of the bus facing the rest of the passengers. Those passengers all began waving little flags, the guitar player began playing, the singer began singing, and the bus began rolling down Moscow’s Golden Circle drive. They handed us flags to wave, and we started singing along to a Russian song we’d never heard before. A man wearing a sash got up and made a speech that made everyone cheer. A woman came down the aisle and handed everyone — us included — caviar in little pastry cups.

The cameras were rolling and they kept taking shots of us and the whole thing was very odd.

I turned to Jamie and said, “I think we’re on the Russian version of Candid Camera.”

Ten minutes later the bus pulled over at our destination and the nice woman who had invited us aboard said, “This is your stop.” She expected us to get off the bus, but the camera man and the interviewer had different ideas.

“We’re from Russian television,” he said in pretty damn good English. “Can we interview you?”

Where are you from? What are your names? How long have you been here? How do you like it? How have you been treated? Etc, etc, etc.

When he finished, the man in the sash handed me his business card and said, “Send me an email. I’ll send you photos.”

The crowd on the bus cheered and waved their flags as we climbed down out of the bus. We got to the sidewalk, the bus pulled away and Jamie said, “Do you have any idea what that was all about?”

“None,” I said. “But we’re going to be on Russian television.”

UPDATE: I saved the printed materials that the people gave me and showed them to the concierge here at the hotel. He laughed and said, “How did you get hooked up with this guy? He’s Vladimir Pecheny and he’s a candidate for mayor of Moscow.”

ANOTHER UPDATE: Yes. We got all our clothes washed at the laundromat for $17 which is what it would have cost for 2 pairs of socks. And as an added bonus, Russian laundromats don’t work like American ones. We simply dropped the clothes off and a nice woman washed and dried them for us.