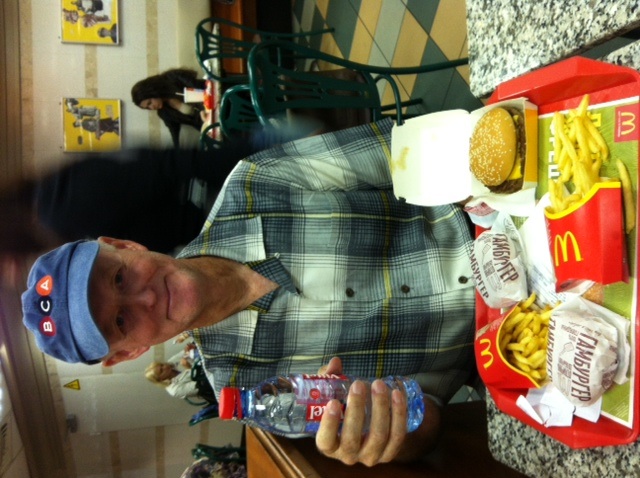 McDonald’s built its first restaurant in the early 1950s in San Bernardino, my hometown. And the first TV commercial I ever wrote was for McDonald’s back in about 1972. So I’ve always had a soft spot in my heart for the company.

I remember reading stories in the news at the end of the Cold War when McDonald’s first opened in Russia — enormous crowds mobbed the store and they ran out of food within an hour or two. They had to call out the riot police.

Nothing has changed. The McDonald’s we saw in St Petersburg had lines out each door and at a walk-up window.

Jamie needed food yesterday after a day of hiking around the Kremlin and said, “Let’s just eat at that McDonald’s over there.”

It was another mob scene. They had lines 20 people deep at both of the walk up windows and probably ten or more deep at a dozen or so lines inside. Every seat was taken and people who had already received their food were circling the restaurant looking for tables like vultures looking for carrion.

The menu was completely in Russian, but we got lucky and the guy behind us in line spoke English and helped us order. I tried to buy him lunch, but he said, “I’m not eating. I’m just here with my friend.”