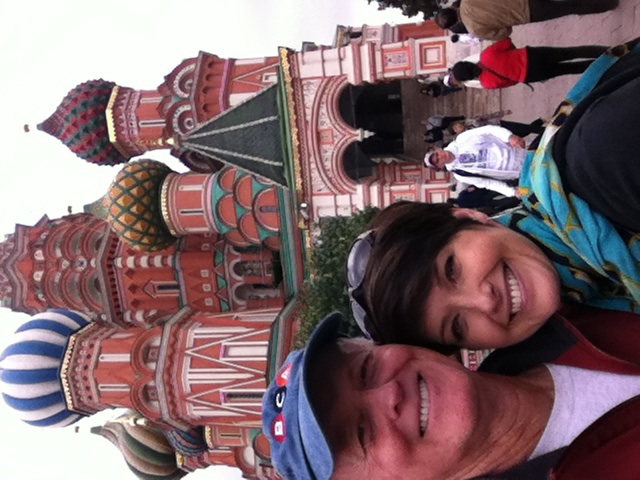 For God’s sake, man, will someone please teach the Russians how to sell tickets efficiently? How the hell can people this screwed up possibly put men into space?

Everyone’s heard of the Kremlin, the glorious old fortress that sits in the middle of downtown Moscow. It’s part of the larger Red Square complex that includes the famous domes of St Basil’s Cathedral (shown above), Lenin’s Tomb, the GUM Department Store (which is now a shopping center that’s somewhere between Rodeo Drive in Beverly Hills and South Coast Plaza in Orange County). It contains a few other notable things that I’m leaving out because they don’t pertain to this story.

There were only three things that were must-sees as far as Jamie was concerned — the Kremlin complex itself, the Fabrege eggs in the Armory Museum, and the crown jewels in the Diamond Stock museum.

The concierge at the hotel said, “You have to buy three different tickets, one for each museum.” The Kremlin opens at 10 a.m. so we arrived at 9:45 to buy our tickets.

This was very confusing. I had to write it down. We had about an hour to kill before we could come back and buy the tickets for the noon tour at the Armory. So we went out and took the photo above. Since we were in the area, we stopped at the Diamond Stock and found out it’s closed between one and two pm.

Crazy us. We thought the Fabrege eggs were such a great attraction that they would be prominently featured. Probably have a huge display of their own. Wrong. They were just lumped into a case with a bunch of other very pretty items. We looked at the rest of the jewelry and the costumes and the suits of armor. Blah, blah, blah.

It was one pm when we finished and the Diamond Stock was closed for lunch, so we hiked back around the edge of the Kremlin and out to find lunch.

Lunch over, we hiked back inside the Kremlin to the Diamond Stock to purchase our tickets.

“One thousand rubles,” the woman said.

I handed her a credit card and she said, “Cash only.”

Un-freakin-believable. They accept credit cards for every other museum in the Kremlin complex, but only cash at this one? I had started the day with 1000 rubles, but we bought a few things along the way and only had 800 rubles. I couldn’t imagine hiking back out to an ATM and back into the Kremlin again.

I pulled out all the change in my pocket and the nice Russian guy behind me in line started counting it out and I had 220 rubles. We got our tickets.

Seriously, what is wrong with these people? You may recall the story of our ticket problems at the Hermitage Museum in St Petersburg. Now we have a situation where there are three museums in the same Kremlin complex (two of them, the Armory and the Diamond Stock, are in the same building), but we have to buy them all at separate times and in separate places and pay by credit card for some and with cash for others. It’s insane.

Nevertheless, all the pain and all the hiking was worth it, because the crown jewels are spectacular. Jamie was mesmerized and I thought she’d never leave.