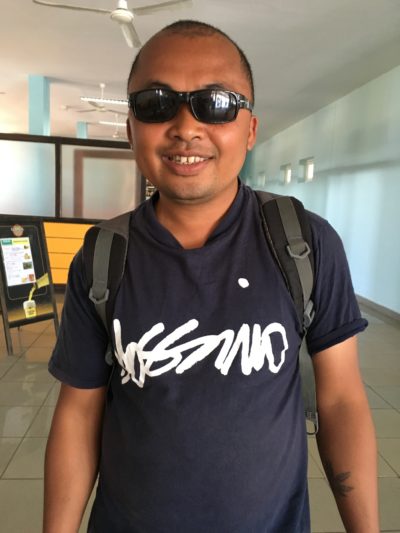 This is Rado, a Malagasy tour guide I introduced myself to at the airport in Toliara, a very small town on Madagascar’s southwest coast. It’s a third world town in a third world country and it’s about as far from the First World as you can get. Geographically as well as metaphorically.

Nevertheless, everyone in the airport seemed to be wearing an American brand name. We saw Nike, Abercrombie & Fitch, Levis, American Eagle, Aéropostale, Hollister, Polo, and our friend Rado is sporting a Mossimo shirt.

So although this could easily be a story about the ubiquity of American brands and culture around the world, it’s not. It is instead a story about what a big, fat loser I am.

Now let’s complete the trilogy by taking one of those familiar treks to my sordid past before we come back to the present:

Back in the days when I was an advertising creative director, our ad agency was located in Orange County, which was in those days an advertising Siberia. No one went there voluntarily and most of those who did go felt as if they had been exiled to another planet far, far away from the Promised Land of Los Angeles and its big time Wilshire Boulevard ad agencies.

That made it really very difficult for us to find talented, experienced writers and art directors, so I resorted to teaching copywriting classes at the University of California Irvine and Cal State Fullerton in hopes of finding young talent that I could hire and train.

As you may have guessed, I did not teach your average class. Bob Colombatto, my first boss, always said, “My job as creative director is to create an environment where other people can be creative.” I followed that same philosophy. I wanted my classroom to be as much like a real ad agency as possible, so I aided and abetted behavior just short of anarchy. Students were encouraged, not penalized, for shouting out ideas or comments. They were pushed to go too far in search of creative solutions. Extra credit was given for being funny.

So the classes I taught were fun. The students and I laughed. A lot. There was a lot of energy in the classroom. I praised, cajoled, insulted, prodded, did everything I could to help students get over their fears of thinking outside the box.

The classes were so unlike anything any of the students had ever experienced in school that they began bringing friends and relatives to class. Attendance was usually over 100%.

One quarter at Cal State Fullerton, I had a very smart, very attractive, very funny young women in my class. She eventually brought her boyfriend to class. He was a very cool-looking, long-haired guy who sat in class and just observed, saying nothing. I always asked students to introduce whatever guests they brought along and when I asked Christine to introduce her guest, she said, “This is my boyfriend Moss.”

While talking to her before class the following week I asked, “What is your boyfriend studying?”

“He’s not really studying,” she replied. “He’s going to be a fashion designer.”

But what I really thought was, “This poor devil is going to starve to death.”

Well, Moss turned out to be Mossimo Giannulli. And a year after my incisive assessment, he had become the hottest designer and manufacturer of beach and casual wear in the country. His brand, which is his first name, was everywhere. Here it is 30 years later and his signature logo is known everywhere. Even in remotest Madagascar.

So I am proud to add Mossimo to the list of people whose talent I totally misjudged.

He’s a gazillionaire, but I’m not.

So at least I beat him on that one.