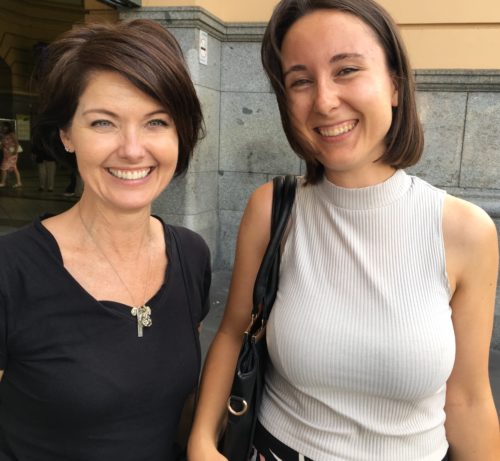 Jamie and I need your help. The future of our marriage may depend on your assistance. Here’s the situation:

We were walking along the Yarra River in downtown Melbourne this afternoon when I attempted to point something out to Jamie.

“Right over there next to that woman in the green top,” I answered.

”That one right there in the flowered pants.”

So we walked up to this young woman and I said, “This may be the oddest question you’ll get today, but we’re having an argument about what color your top is. I say it’s green. My wife says it’s brown. Which one is it?”

After justifiable staring at us for a few seconds as if we were both lunatics, she said, “I’d say it’s cream.”

Then the woman said, “I don’t know. I’ve never thought about it. Maybe it’s a light gray.”

The future of our marriage is looking a very shaky at the moment. Only you can save it.

What color is the woman’s top?

UPDATE: Now Jamie claims she called the color beige. She also claims she said light brown. I hope you’re all beginning to understand the burden I’m laboring under with this woman.