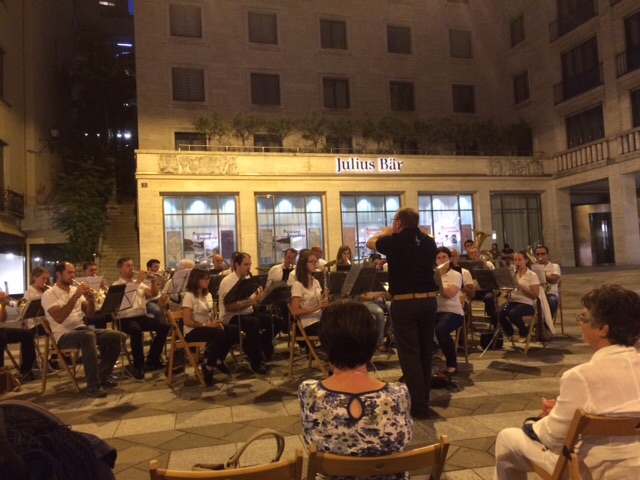 It was a warm summer night, the kind we used to love in Southern California — hot enough to bring you to the edge of a sweat, but with gentle breezes cool enough to keep you from actually getting there.

Jamie and I were walking along the Lugano street that’s home to all the world’s top luxury brands (luckily, it was late enough that they were all closed) when we heard what sounded like an orchestra warming up down the street, so we headed in that direction.

Lo and behold, we stumbled upon a piazza where a symphony orchestra was just getting ready to play. It all seemed pretty impromptu. As we watched them warm up, a city truck pulled into the piazza and workers began haphazardly unloading fifty or so plastic chairs. Passersby quickly filled them, and others sat down on the steps of nearby businesses. The total audience couldn’t have numbered more than 75 or 100. There were no lights except the ambient lighting of the nearby stores.

All of a sudden, the orchestra began to play. Between selections, the animated conductor turned to the audience and joked and told stories and interacted with audience members. Of course, it was all in Italian, so we have no idea what he was saying. But he was saying it all with great enthusiasm.

It really was a perfect evening.