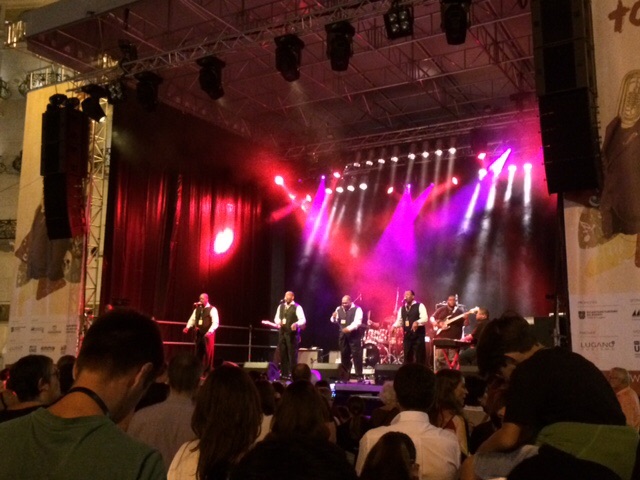 We just happen to be here at the same time as this year’s Lugano Blues-to-Bop Music Festival. They have stages all over town and different groups perform on each stage every night.

The photo above is an American gospel group that performed on the main stage on opening night. They were pretty damn good, but the audience just didn’t seem to be into it.

One day a few years ago, Jamie and I were going through some old boxes of paperwork and ran across all my elementary school report cards. Turned out my mom had saved them all. Jamie thumbed through them and howled with laughter when she got to the one from kindergarten.

“You won’t believe what your teacher wrote,” she said. “Jimmy does not participate in rhythms.”

Mrs Kelsey had me pegged at an early age. Fact is, I have no rhythm. I have nary a scintilla of musical ability nor even comprehension. I can’t keep a beat. I am, I admit, pathetic when it comes to music.

Anyone who’s ever been to a concert with me knows that nothing has changed since kindergarten. We went to a Rolling Stones concert in Dallas a few months ago and while 80,000 other people were dancing and singing along with Mick, I basically stood with my two feet planted in place for the whole show, hands at my side until a song ended, when I applauded as if I was really feeling the music. I wasn’t.

I tell you this for one simple reason: The Swiss audience at the American gospel group’s concert looked like it was composed of a thousand me’s.

“If you like to dance,” the lead singer screamed, “come on down in front of the stage.” No one moved.

“Come on down,” the lead singer reiterated. “We want the dancers right here in front of the stage.” No one moved.

Jamie’s theory is that no one in the German, Italian and French-speaking Swiss audience understood what he was saying because of his strong Louisiana accent.

I choose to believe that the Swiss do not participate in rhythms.