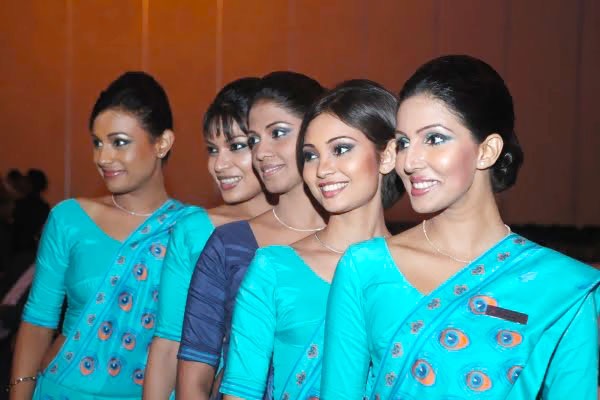 There really is something very special about the Sri Lankan people. They are so happy, so helpful, so friendly. One of their smiles can light up a room.

I headlined the previous blog post “Sitting in the cheap seats”, which is what we did on the 10-1/2 hour red-eye flight between London and Colombo, Sri Lanka. Instead of dining on fine food and sleeping for six hours in the comfortable, fully-reclining business class seats I’d hoped for, we were back in economy, eating regular folks food and sitting in seats that reclined just enough so that your mouth falls open and your head bobs around when you try to sleep.

Except something funny happened. Instead of being a horrible flight or even an average flight, it was one of the best flights either of us have ever experienced.

How is that possible?

Simple. The service was so tremendous that the time just flew by (you’ll pardon the expression).

The flight attendants were all gorgeous. It was like they recruited the entire crew from the Miss Sri Lanka competition. And their smiles. I don’t know how to describe their smiles. They are just so warm and big and so natural and so absolutely effortless.

Since I’m not a drinker, I asked for water when everyone else (including Jamie) was having wine. Our flight attendant said, “I feel bad if I can’t give you more.”

That was the start of a beautiful relationship. She literally fawned over me the rest of the flight. In my younger days, I would have convinced myself that she had fallen victim to my charisma and raw animal magnetism, and that she could resist neither my sexy, boyish charms nor my sparkling blue eyes. At this age I fear that she was merely being kind to an elderly American gentleman.

Whatever the reason, the flight attendant and I made some kind of connection and the less I asked of her, the more she wanted to do for me.

I just asked Jamie to describe the relationship I struck up with the flight attendant. She said, “She was giddy. She was awestruck. She couldn’t do enough for you.”

On one hand, I know we received very special treatment, but on the other hand, I suspect that every other flight attendant was giving the same treatment to every other passenger.

As a result, the red-eye flight we were dreading ended up being a wonderful surprise. In addition to the incredible service, we had a choice of English or Sri Lankan dinners right after take-off and the same choice of breakfasts just before we landed. We got real silverware with which to eat those meals. We got real glasses instead of plastic cups. And we got hot, refreshing towels before each meal.

There’s just one problem. Now I’m wondering if this is what economy class is like on Sri Lankan Air, what did those lucky bastards up in business class experience?