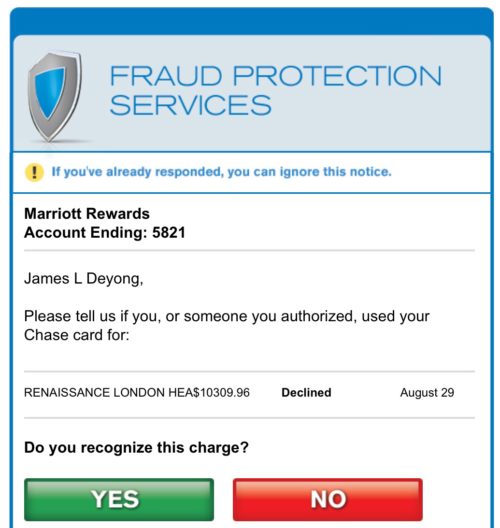 Have you ever found a fraudulent charge on your credit card statement? I have. A couple months ago I had a charge from some merchant I’d never heard of in a town I’d never been to. It was an insignificant charge, just a couple bucks or so, but I found it because I go over each of my credit cards statements with a fine tooth comb in order to maintain my reputation as one of the world’s cheapest men.

When I called the fraud department at my credit card company, they told me that the crooks often make very small fraudulent charges like this just to test the water, just to see if it gets noticed. Imagine how much money they could make if they do that millions of times per month on millions of accounts.

That’s the set-up. Here’s the story:

We flew from Madeira to London yesterday afternoon and we’re leaving for Johannesburg, South Africa tonight. So we needed a hotel for just twenty-four hours. We chose a very nice one we could pay for with frequent flyer points — a Marriott very near Heathrow.

But early this morning we received a fraud alert email from our credit card company. It seems that the hotel had attempted to bill us $10,309.96.

Since the room had been paid for with frequent flyer points, $10,309.96 seemed a bit excessive for the dinner for two we had billed to our room.

We went down to the front desk to discuss it and the clerk’s eyes bugged out when she saw how much the hotel attempted to charge our credit card.

After a bit of investigation and a couple phone calls, she figured out that the Marriott computer had gone a bit haywire at the end of the day and had put all the room charges for all that night’s guests on our credit card.

She was embarrassed. We were relieved.

But we’d like to send a big thanks out to our credit card company for declining the charge.