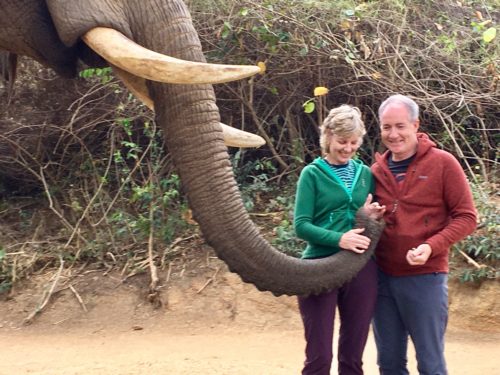 Meet our new friends, Tony and Angela, from the Isle of Arran. We sat with them at dinner our first night at Vuyani Lodge, and then did a bunch of other stuff with them over the course of the next few days.

He’s funny and she’s sweet. Gee, I can’t imagine what the four of us might have had in common.

But you’re probably asking yourself, Where is the Isle of Arran? Well, as Tony explained, it’s the largest island in the Firth of Clyde. What more do you need to know?

Measuring in at just 432 square miles, the Scots might say Arran is just a wee place. And since the island has just a hair over 5,000 people, a considerable percentage of its population disappeared when Tony and Angela left for South Africa.

Oh, by the way, they were in South Africa on their honeymoon.

It was a real pleasure getting to know you.