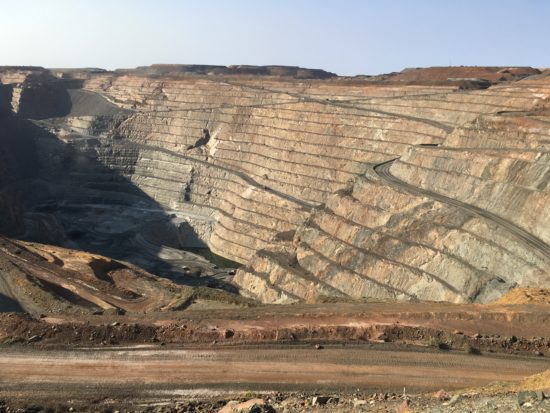 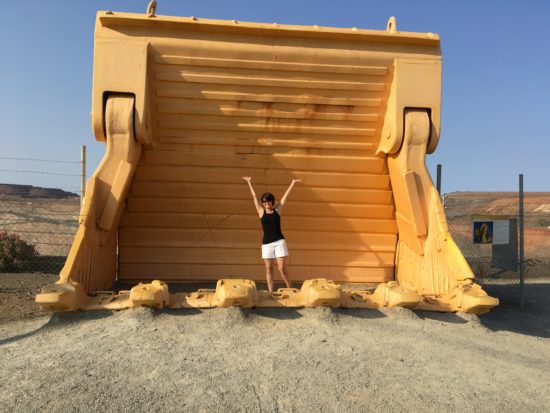 You can’t write about Kalgoorlie, Western Australia without getting out your thesaurus and looking up the word “big.” Words like colossal, enormous, gigantic, huge, immense, massive, and tremendous are sure to come in handy.

The Super Pit, located literally a stone’s throw from the center of Kalgoorlie, is one of the world’s largest open pit mines. It’s so big, in fact, that it can reportedly be seen from the International Space Station.

Swing a pick into just about any piece of open ground out here in the Australian outback and you’re likely to strike some kind of valuable ore. They’ve discovered vast deposits of gold, silver, uranium, iron, nickel, diamonds, coal, and a dozen other minerals, but none of them are mined on the scale of what you find at Kalgoorlie’s Super Pit. It produces 850,000 ounces of the various precious metals every year. Since it opened in 1989, it has produced over 13 million ounces of gold. To repeat, 13 million ounces of gold.

When I say large, I mean LARGE. The Super Pit is currently 2.1 miles long, nearly one mile wide, and around 1300 feet deep. “Currently” is the key word because they’re still digging, so no one really knows how deep or wide or long it will eventually go before the gold runs out.

The top photo shows The Super Pit. Believe it or not, the roads at the top of each terrace are about the width of a small freeway. Look closely and you may see an immense “dump truck” filling one lane on one of those roads.

How big are the trucks?

Well, in the second photo, Jamie’s standing in the front scoop from one of the earth movers used down on the bottom level of the Super Pit. She’s dwarfed by that scoop, so just imagine how huge the earth mover it’s attached to must be. And then consider the fact that each of the dump trucks used to haul ore up from the bottom of the Super Pit holds four of these huge scoops of ore.

Each replacement scoop costs $1,400,000. That’s for just the scoop, not the earthmover that goes with it.

One question: What did they do with all the dirt they brought up out of the Super Pit. One would think there would a huge mound of dirt the same size as the pit, but we looked around and didn’t see one. Maybe Tina, Wendy or Tiny can answer this question.