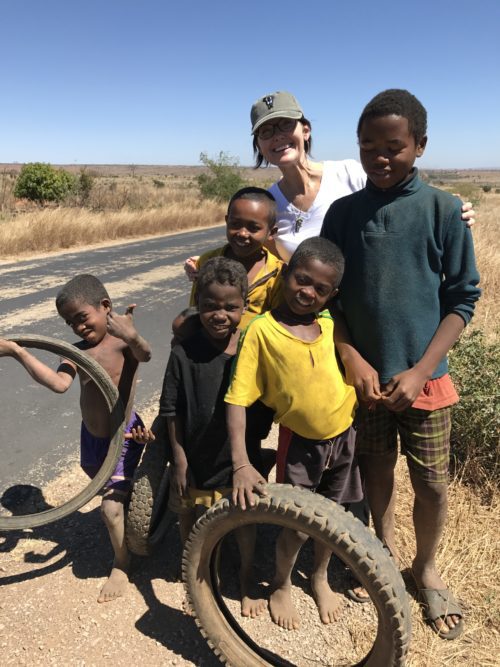 When we stopped to take a photo of the giant boab, there was a gaggle of boys playing about 100 yards down the road. As soon as we stopped, they came running.

It’s easy to see which one’s the ringleader — the kid in the yellow shirt. Jamie said, “Can I take your photo” and he looked at the others and in heavily-accented English said, “Fo-to? C’mon, let’s take a fo-to.” As Jamie said later, what he meant was, “C’mon, guys, I think we have a live one here.”

The kid’s probably only six or seven, but he already has swagger, doesn’t he? Look at that pose. Even the much older kids deferred to him.

Also check out the little kid to the far left. He has plenty of swagger of his own with that thumbs up pose. 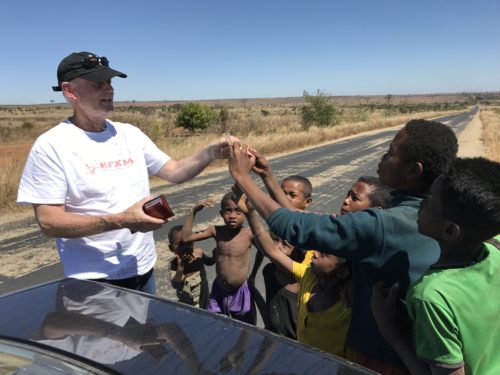 After the photo (above) was taken, I took out my wallet intending to reward them.

We had been warned that thievery runs rampant here in Madagascar. For example, as we crawled through the rush hour streets of Antananarivo last night on our ride from the airport to our hotel, I was looking at my iPhone. It was a warm afternoon and my window was rolled down. The cab driver warned me not to hold the phone so close to the window because someone could easily reach in and snatch it away from me.

So with that in mind, pulling out a wallet crammed full of cash in the middle of all these kids was probably a mistake.

Unfortunately, I didn’t have any change or small bills, so I couldn’t give something to each of them. The smallest thing I had was a 5000 Ariary Madagascar note, worth about $1.

Luckily, our driver noticed that I had mistakenly given them a left over 5000 Rand South African note. “Wrong country,” he said. Good thing, because I doubt that their squalid villages have any foreign exchange offices.

I dug around and found a Madagascar 5000 Ariary note in my wallet and when I pulled it out, they all started grabbing at it. I stopped and had our driver explain to them that they were supposed to share it. The biggest kid initially took the note, but it soon ended up in the hands of the yellow-shirted ringleader.

The littlest kid, the one on the far left, pointed to the ballpoint pen clipped to my collar, and asked if I would give it to him. My reaction, unfortunately, was to think, No, I need my pen. Damn it. I have about ten pens in my iPad case, and I regretted not giving it to him as soon as our car pulled away.

Shame on me. I should have given him the pen and given each of them 5000 Ariaries.