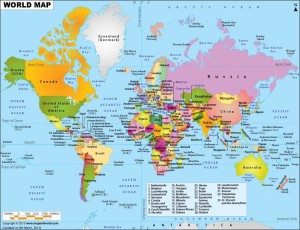 People always ask us how we ended up taking our first trip around the world. Here’s the answer.

About three years ago Jamie and I were watching an NFL game one Sunday morning when she ventured into a sore subject, one of the few topics on which we disagree.

Jamie: What do you want to do on our next vacation?
Jim: (Reflexively) Let’s go back to Australia.
Jamie: No. I love Australia as much as you do, but we’ve been there on our last six vacations. We need to go somewhere else before we go back again.
Jim: (Disappointed) Really? Where do you want to go?
Jamie: How about Norway? My family’s from Norway and I’ve always wanted to go there.
Jim: (Resigned) Fine. We’ll go to Norway.

At halftime I dug out a world map, because the only thing either of us really knew about Norway was that it’s “up there” to the north of most European countries. We spread the map out before us on the table.

Jim: Look at this. Norway is right next door to Iceland. I’ve always wanted to see Iceland. Let’s go there, too.
Jamie: Iceland and Norway it is. But, you know, I’ve always wanted to visit Sweden and it’s right next to Norway. Let’s go there, too.
Jim: Yeah. And Finland is the only country between Sweden and Russia. We could go to Finland and then visit Russia.
Jamie: (A bit dubious) I’m not really interested in Russia.
Jim: (Ignoring her) I’ve always wanted to take the Trans-Siberian Express.
Jamie: Say what? We’ve been together twenty years and I’ve never heard you mention the Trans-Siberian Express.
Jim: Oh, yeah. It starts off in Moscow, goes all the way across Siberia and ends up in Beijing. It’s supposed to be beautiful.
Jamie: Well, I’m game. Let’s do it. But if we’re going to end up in Beijing, there are some other things I’d like to see in China — the Great Wall, the Terra Cotta Soldiers, pandas….
Jim: And Shanghai. We can’t visit China without seeing Shanghai.
Jamie: (Pointing to the map) What about Hong Kong? If we’re traveling that far, we might as well visit Hong Kong.
Jim: Great idea. And, well, I’ll be damned. Once we’re in Hong Kong, look how close we are to Australia.
Jamie: (Looking askance) I can’t believe it. You’ve managed to take us all the way around the world just to get us back to Australia.
Jim: I am hurt that you would make such an accusation.
Jamie: Hmmmmmmm.
Jim: Hurt, I tell you.

Of course, that was just the beginning. It took months of research and coordination to figure out dates and flights and hotels and visas. It really was a massive undertaking.

Most people never think about going around the world. Even if they had the luxury of enough time to do it right, it’s too complex if you plan it yourself, too expensive if you sign up for a pre-packaged cruise, and too time-consuming if you have a regular job.

For better or worse, I’m obsessive-complusive enough on one hand, and cheap enough on the other, to plan a six month trip around the world that is semi-affordable. And because I have the luxury of being able to make a living on an iPad, it doesn’t matter if I’m working in my living room or in a coffee shop in Ulan Bator. As long as I have an internet connection, I have an office. (I don’t mind admitting this two years after the fact: I had a handful of clients who never knew we’d left the United States and had no idea I was emailing them work from some exotic locale halfway around the world.)

I blogged every detail of our first circumnavigation and everyone seemed to enjoy it.

So what the hell. Let’s do it again.