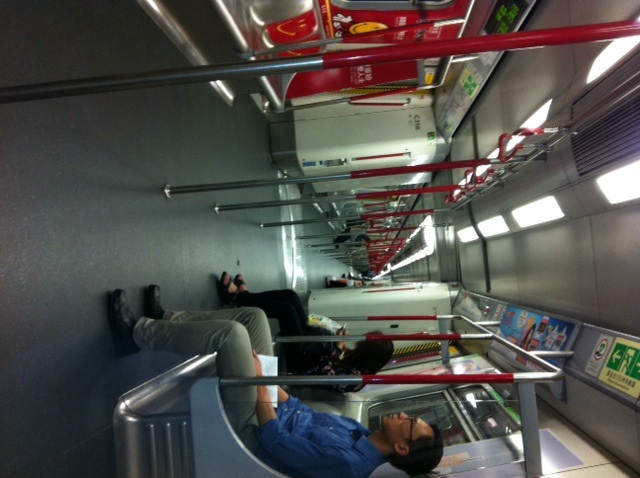 I was doing a little online research last night when I ran across a blog in which a young woman raved about how great the Hong Kong subways are. We were doubtful after our fiasco with the Moscow subways.

The electric tram runs right past our hotel, so we climbed aboard this morning and took it to where we thought we were supposed to go to catch the subway. I pulled a city map out of my back pocket and had looked at it for no more than ten seconds when I heard a man behind me say, “Are you lost? Can I help you?”

That was our introduction to Jason, a Malaysian accountant who has now lived in Hong Kong for ten years. When I told him we were looking for the subway station he said, “I have some time this morning. Come with me and I’ll show you where you need to go and what you need to do.”

He lead us down into the subway station, told us how to buy tickets and took us over to a route map and showed us exactly which trains to take.

Unlike Moscow, the stations names are clearly marked in Chinese and English. The trains are also clearly marked in both languages. And they have electronic maps inside the cars showing you where you are and what the next stop is.

As an extra, added bonus, the trains are spotless. There’s no eating, drinking or smoking allowed. And, for god’s sake, they’re air conditioned.

By the way, if Jamie had taken this photo about 30 seconds earlier the car would have been packed with people cheek to jowl.