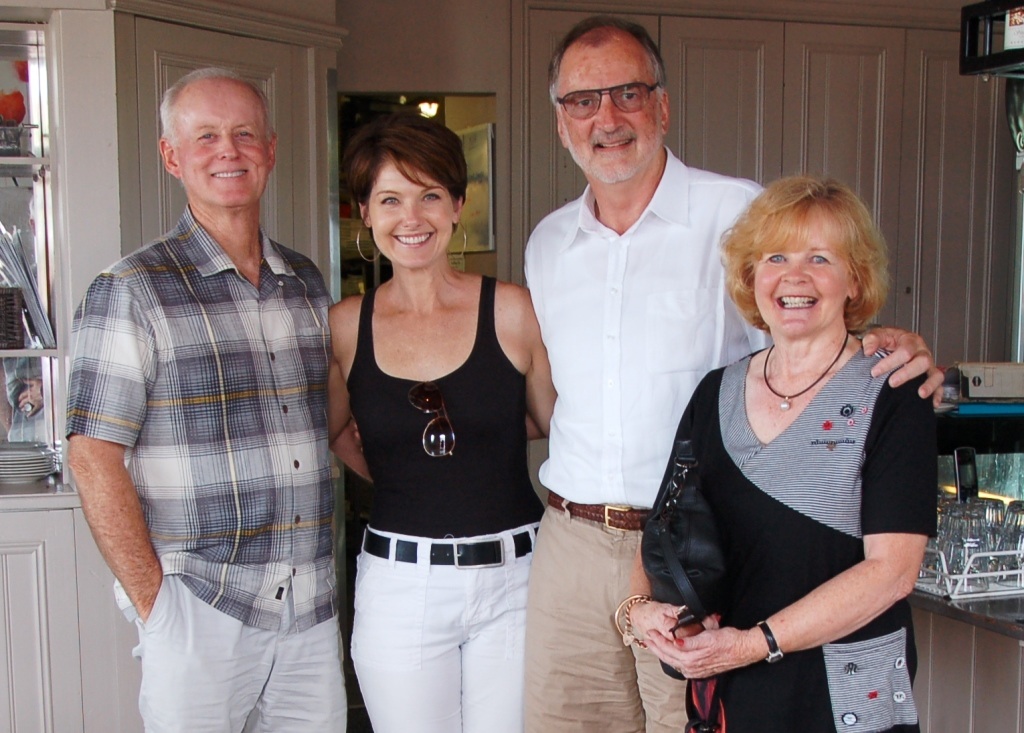 The photo above shows us with Ray and Polly, the first Aussies we were ever able to categorize as friends. We caught up with them for lunch in beautiful Henley Beach a few days ago. Despite our friendship, Ray and Polly are responsible for our creepiest moment ever in the land down under.

Back in 2000 we rented their beautifully-restored cottage in Tanunda, South Australia, just a few miles from Angaston.

Polly came in every week to clean the cottage and re-stock our refrigerator with local goodies. Being the gregarious sort I am, I invited her to lunch the following week and we discovered that she was a delightful person. We had such a good time that she reciprocated and asked us to a follow up lunch to which she would bring her husband.

Prior to that lunch we had a very weird experience at the cottage. The mosquitos were particularly bad that year, so one night I sprayed our bedroom before we went to bed and then closed the door so that any live mozzies would be outside the room. We climbed into bed, turned out the lights, and expected to go to sleep.

That’s when it got weird. Really weird.

A few minutes later, we both heard someone running up and down the hall outside our bedroom. Inside the house! The cottage had creaky hardwood floors and there was no doubt in either of our minds that we were hearing footsteps. It freaked us out because there was absolutely no question that someone was in the house. I got up and crept around the house, expecting to be whacked over the head by a burglar, but found that the doors were locked and no one was in the house.

A few days later we had lunch with Ray and Polly. After a bit of small talk I said, “Let me ask you a crazy question. Have any of your guests ever asked if the cottage is haunted?”

They looked back and forth at each other and acted a bit embarrassed.

Finally, Polly said, “Why do you ask?”

I told her about our experience and she said, “We think the cottage may be haunted. You’re the second tenants who’ve had a strange experience and we had a cleaning lady who quit because she said it was haunted.”

I asked to hear that story. Wouldn’t you?

“Well,” Polly said, “one week she made the bed in the third bedroom and then moved on to clean another room. When she went back into the third bedroom a few minutes later, the bedspread was messed up as if someone had been sitting on it. At first she thought her mind was playing tricks on her and that maybe she hadn’t actually made the bed. But when it happened again, she knew something strange was going on because she knew no one else was in the house.”

Polly had done a little detective work and found out that one of the house’s previous owners had died in that back bedroom many decades ago.

“The ghost doesn’t seem to be malevolent,” she said. “It just likes to play tricks.”

I’m not a big believer in the supernatural, but I thought this was kind of cool. It freaked Jamie out, but I began following the same ritual every night hoping that the ghost would come back and that I’d be able to catch a glimpse of it. Before retiring for the night, I went into the bedroom and sprayed for mosquitos, then shut the door tight before climbing into bed.

Despite my best efforts, the ghost never returned.