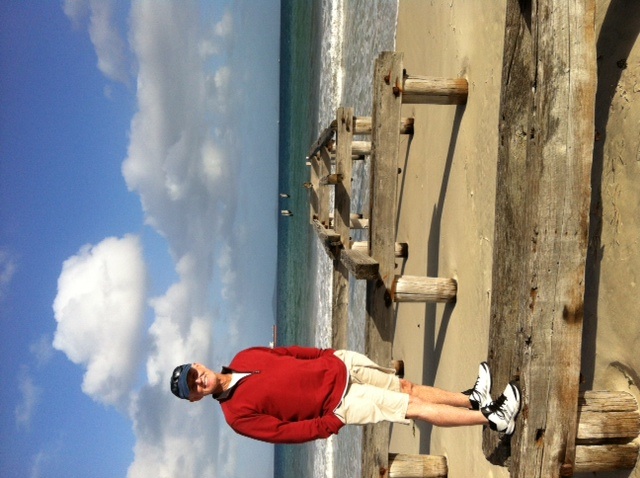 This photo takes me back 42 years. And that, of course, leads to another of my long, roundabout stories that will eventually make a point:

My dream as a kid was to visit Australia. As soon as I graduated from college I bought a ticket, flew across the Pacific and hitchhiked from one end of the country to the other.

Coincidentally, my favorite college professor was Australian. When he learned my plans he said, “Call my brother when you get to Perth. He’ll put you up.”

Turns out I called him on Christmas Eve, but he and his wife greeted me like a long lost friend and took me home. I celebrated Christmas with them and on December 26 celebrated Boxing Day by driving around Perth visiting all their friends.

At one of those friends’ homes I met a couple named John and Vera Langer. When they found out that I was hitchhiking around Australia they invited me to visit them in Esperance, a small beach town on the south coast of Western Australia. Now the fact was that I had never heard of Esperance and when I found out that it would probably take me a couple days to hitchhike there, I had very little interest in doing it despite their kind offer. But Johnny Langer was a very persuasive man and he said, “It’s the best place in Australia, mate. We live right on the beach so you’d be crazy to not to visit.”

To make what could be an even longer story relatively short, I arrived on their doorstep on New Years Eve and spent two weeks with them on one visit and an additional week some time later. They were wonderful people. I was half way around the world from home, but Johnny and Vera and their daughters Tina and Kathy seemed like family.

I traded a few letters with Vera over the years, but we eventually lost track of each other.

When we were planning this trip I told Jamie that I’d really love to spend a couple nights in Esperance just to see it again. She, of course, agreed that we should do it despite the fact that Esperance is still far off the beaten track and a day’s drive away from anywhere else on our itinerary. What a great wife!

All I wanted to do is see how the town has changed and find out if the Langers are still alive. To tell the truth, I didn’t think I’d have much success.

Well, it turns out the town has grown tremendously. It’s now a resort destination and a very busy working port. It really has become one of the nicest little towns we’ve seen in all our Australian travels. It has a bustling downtown and all the small homes on the Langers’ street have now been replaced with large, modern oceanfront houses.

We went into the Esperance tourism office this afternoon to get a map and the women behind the counter were about my age (maybe even a little older). When I asked how long they’d lived in town one of them said since 1965 and the other said since 1960. So I asked if either of them remembered John and Vera Langer. Much to my surprise, they both did. I explained my reason for being there and one of them was able to bring me up to date on the Langers.

Unfortunately, Vera died of a heart attack about twenty years ago and Kathy, the youngest daughter, also passed away. Much to my surprise and delight, Johnny Langer is still alive and living outside Perth. His two remaining daughters, Wendy and Tina, live in a lovely old Victorian mining town named Kalgoorlie.

Here’s the crazy part: Jamie and I stopped in Kalgoolie yesterday and had lunch at a restaurant called Dome. The woman in the Esperance tourism office told us that Wendy and Tina own a shop that’s located right next door to Dome. We actually walked right past their shop and commented on its name.

Damn it. I was that close to them, but never knew it until I had driven four more hours to Esperance.

The woman at the tourism office couldn’t remember either of the girls’ married names, but she sent me down to visit Wendy’s best friend at another shop here in Esperance. That friend gave me Wendy and Tina’s married names and phone numbers.

The photo above was taken on the beach across the street from the Langers old home. The jetty was falling apart 42 years ago and looks like it’s continued to do so.

What a great day. Esperance is a beautiful little town. The beaches and views are absolutely stunning. And it looks like I’m going to be able to track down my old friends.