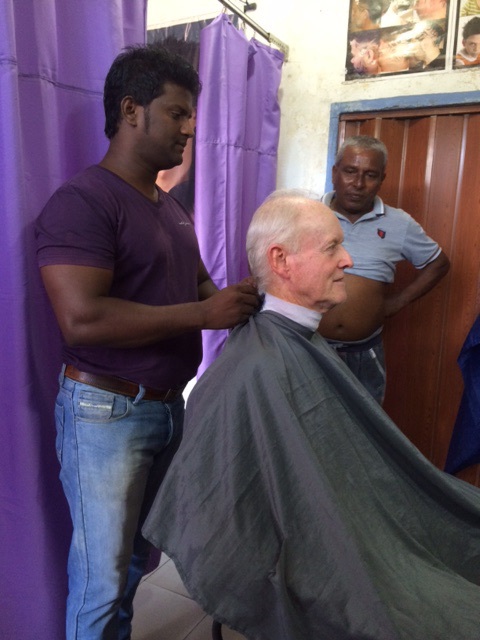 Before haircut. Neither Jamie nor I can begin to explain why Vilmer has pulled up his shirt to expose his belly. 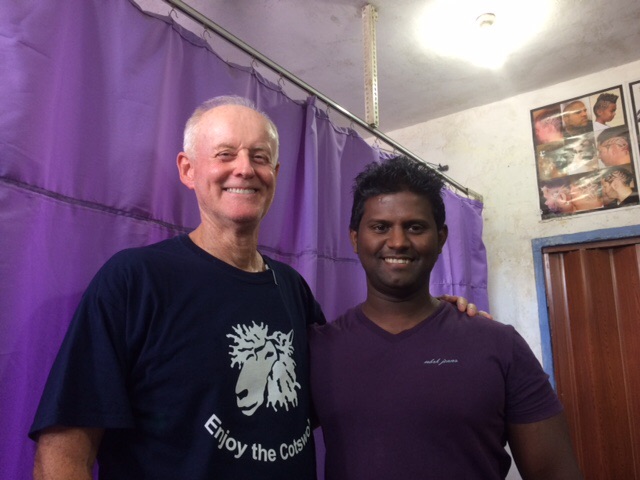 After haircut. My new Sri Lankan stylist looks rather proud of his artistry.

My Dutch genes kicked in a couple days ago and I told Jamie I was determined to get my hair cut by a street barber in Sri Lanka or Bali. I have only about 100 hairs left on my head and it pisses me off when I have to pay $16 to get them “styled” in Texas or California.

So after Vilmer the tuk tuk driver was finished showing us the sights in downtown Colombo, I asked if he knew a good barber.

Vilmer had a full head of closely cropped hair and I thought, Well, his hair looks ok and it’s tough to screw up the few hairs I have left. Let’s do this.

Vilmer’s turned away from the main streets and we dove deep into Colombo’s narrow network of serpentine alleyways. After ten minutes or so, he pulled the tuk tuk into a small spot along an alleyway, climbed out, and motioned for us to follow him. It really did look like we were in the middle of an Indiana Jones movie. We didn’t have a clue where we were or where we were going or where we had come from.

He led us into a small shop and introduced us to a young barber who motioned to a chair and indicated that I should take a seat. Next thing I knew, I was getting one of the best, fastest haircuts I’ve ever had. Ten minutes later I was done. Jamie gave me a thumbs up.

I hopped out of the chair and said, “Good job. How much?”

The barber started to tell me, but Vilmer interrupted and began speaking in Sinhala. Next thing I knew, Vilmer was in the chair, getting his head shaved.

When his haircut was complete, I again asked the barber, “How much?”

That’s equal to about $3.54 give or take a couple cents and depending on the day’s current exchange rate.

Hmmmmm, I thought to myself, that’s about double what I expected this haircut to cost, and it seems to be more than the barber is willing to ask for, and I think I’m paying for Vilmer’s haircut, too, but it’s only $3.50 and he did as good a job as my $16 barber back in Texas, so I paid in full and also gave him a 100 rupiah tip.

These rupiahs are burning a hole in my pocket, baby.