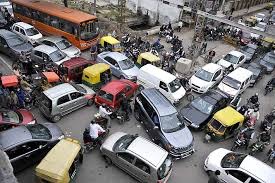 The ride yesterday afternoon from the airport to our hotel in downtown Colombo was memorable if for no other reason than that we survived to tell the tale. The same goes for our ride to the train station this morning.

The roads seem like absolute chaos, but after two rush hour drives under our belts, I’m convinced there’s a system. I just don’t know what it is, and with my American perspective, may never fully comprehend it.

There are supposed to be two lanes of traffic in each direction, but somehow four lanes of traffic crowd into those two lanes. Theoretically, the slower vehicles — tuk tuks, motorcycles, busses, bicycles — should stay in the outside lane and the faster vehicles should stay in the inside lane. Except that everyone is wildly weaving in and out of the four lanes they’ve created and they’re all honking at each other incessantly. Let’s call it the Colombo Cacophony. I guess that it’s either exhilarating or terrifying depending on your temperment.

Our driver this afternoon said, “We honk to say watch out, to say slow down, to say hello, to say thank you.”

In the midst of all this you have pedestrians. During dinner tonight at Tea Trails, I made the observation that Sri Lankan pedestrians do something I’ve never seen anywhere else and all the other non-Sri Lankan guests all laughed and agreed:

No matter how fast and heavy traffic may be, pedestrians walk across the street without looking either way. Whether they’re in a marked crosswalk or jaywalking, they look straight ahead as if there’s not a car within ten miles. Their gaze never varies to one side or the other to judge the likelihood of their stepping directly in front of an oncoming vehicle nor to assess their own safety. It’s as if they have some sort of super power that will keep them from suffering any harm, but that power will be lost if they so much as look at an oncoming car.

Somehow it all works. Cars come within inches of each other at speeds far too fast to be safe, but we saw no accidents and no angry drivers. Pedestrians walk through it all with no apparent fear.

It was crazy and spine-chilling and fun all at the same time.