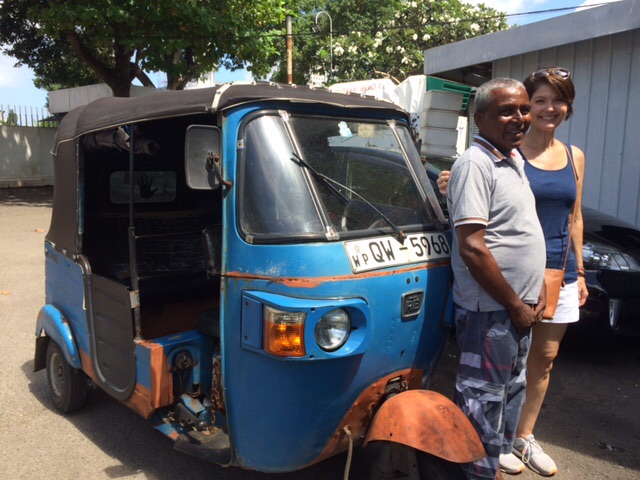 I’d never heard of a tuk tuk until we arrived in Colombo. It’s a kind of an auto rickshaw that gets it’s name from the sound the small engine makes as it chugs own the street: tuk-tuk-tuk-tuk-tuk.

A tuk tuk has a sheet-metal body, three wheels, a canvas roof with drop-down side curtains, a small cabin in the front of the vehicle for the driver, and a back seat big enough for two passengers (three if they’re either very small or very friendly). The driver steers, accelerates and brakes with handlebar controls instead of a steering wheel.

I read that there are a million tuk tuks in Sri Lanka. That’s a huge number, but I believe it because every road, every highway, every dirt path is clogged with them. They’re lined up by the dozens in front of any building from which a potential passenger might possibly emerge. They swerve crazily through the worst rush hour traffic and appear to risk the lives of the drivers and passengers.

Vilmer, the lucky tuk tuk driver who was parked outside the Colombo Hilton Residences at the moment we walked out the front door, knew he had a couple suckers as soon as he laid eyes on us. We told him we wanted to go to the Odel shopping center and off we went. After pulling into Odel’s parking lot, we climbed out of the tuk tuk and I asked Vilmer how much we owed him.

“Nothing,” he said. “You go shopping and I’ll wait for you over there” as he pointed toward a line of competitive tuk tuks.

We shopped. We came out. Vilmer was waiting for us. We climbed back into his tuk tuk and headed for The MC, the next shopping center on Jamie’s list. Again, Vilmer said, “Go shopping. I’ll wait for you out here.”

After four hours we had seen it all. Or at least as much at least as much as we wanted to see. The Government Shops. The White House. The “heart” of Colombo (where the nation was founded). The fancy schmancy new theater complex. The beach. The dark alleys that looked like something out of Indiana Jones. So Vilmer took us back to the hotel, we climbed out of the tuk tuk and I said, “How much do we owe you?”

That’s about 28 American dollars. I laughed because we had been told that the going rate for a tuk tuk and driver is about $5 per day in Colombo and we had only been with Vilmer for half a day.

My normal inclination would be to haggle, but I figured it was my own damn fault for not negotiating a price up front. And I thought, Hell, this $28 won’t make a difference in my life, but it might make a big difference in his.

I peeled off 4000 rupiahs and made our tuk tuk driver’s day. Maybe his month.

More about those dark alleys in the next post.