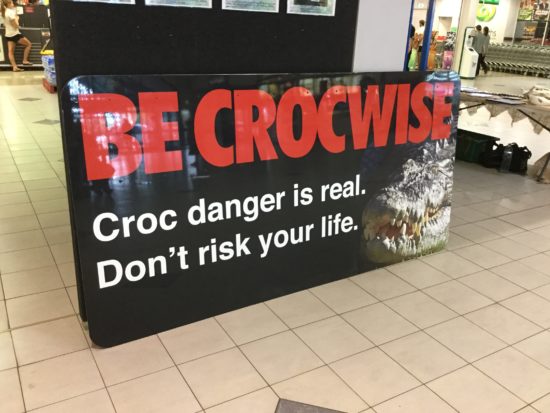 All those stories you’ve read on the internet are true — Australia has a real problem with man-eating salt water crocodiles. Which explains why the local shopping mall here in Broome is highlighting this safety display.

I did my first professional ad for a Los Angeles chain of brake and tire stores called Big Brake. The headline of that first ad was “At Big Brake, we stand in front of our work.” Not a bad little headline for a first effort.

But there’s a backward gap of ten years or so between that first professional ad and my first amateur ad. That distinction goes to a safety poster I created in Mr. Richmond’s eighth grade art class.

The assignment was to create a safety poster that would warn people to avoid some sort of risky behavior. The choice of risky behavior was up the the individual student. And please keep in mind that the term “risky behavior” didn’t have the same connotation back then that it has now.

As you might expect, all the other kids did posters that said things like, “Don’t run with scissors” or “Don’t go swimming until an hour after you eat” or “Look both ways before crossing the street.”

Perhaps I was odd even as a kid. Or perhaps I somehow sensed that I was destined to have a lifelong love affair with Australia. Because instead of doing something expected like the other kids, I created a safety poster that looked something like this: 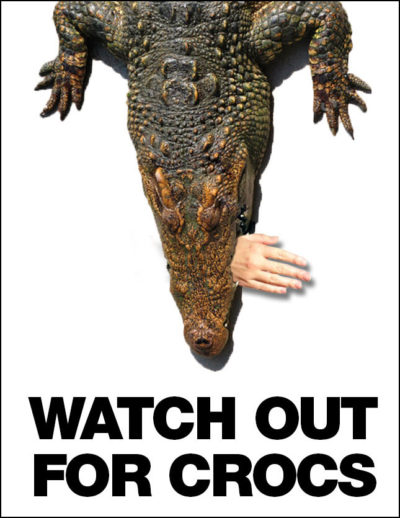 I thought it was genius. The design was simple and the headline was direct. As the ad agencies of the world now describe their work, it was edgy.

At least that was my opinion. Mr. Richmond begged to differ. He may have been the first person to utter the words I’ve heard repeated so many times in my life:

“What is wrong with you, deYong?”

Jamie says it to me at least once a week. (Who do I think I’m kidding? She says it far more often than that.)

But please note that while scores of Aussies are apparently consumed each year by these enormous amphibian assassins, I am now 68 years old and have managed all these years to avoid being even nipped by one.

If only the Aussie victims of those ravenous reptiles had been allowed to receive the words of wisdom I so eloquently expressed back in 1961:

Watch out for crocs.

ADDED NOTE: Thanks to my buddy Ray Sanford for putting together this quick version of my 8th grade croc safety poster.