I love astronomy, but I’ve never known Jamie to show any interest in the subject. Not until this trip when she decided she wanted to do a stargazing tour.

To do it right, you need to be in a place with no light pollution, which usually means far from a city. Unfortunately, the skies were cloudy on Madeira and in South Africa and the recently-departed astronomer had not yet been replaced on Mauritius. So we were out of luck until Jamie found Greg Quicke, the operator of Astro Tours here in Broome.

Good thing we have a rental car because Greg’s 2-hour astronomical extravaganza takes place in a wide clearing in the middle of the outback, twenty minutes outside of Broome. Greg says it’s the perfect place to experience some of the planet’s best stargazing skies.

When we (and forty or so other guests) arrived, we found about a dozen telescopes of various sizes aimed toward the heavens so we could all view the moon, the planets, the stars, and even gaze at empty places in the sky that are jam-packed with stars when you view them through those telescopes.

Of course, some nights are better for stargazing than others. You want a dark night with as little moon as possible so that the rest of the sky isn’t washed out by lunar light. We were lucky enough to be here just a couple days past the New Moon, so it was just the smallest of crescents, a tight-lipped little smile in the evening sky. Our timing was also very good because it dipped behind the horizon very early in the evening, leaving the sky just as dark as it could possibly be.

Coincidentally, it was also the Vernal Equinox, the first day of Spring, the point on the calendar when day and night are equal (more or less). 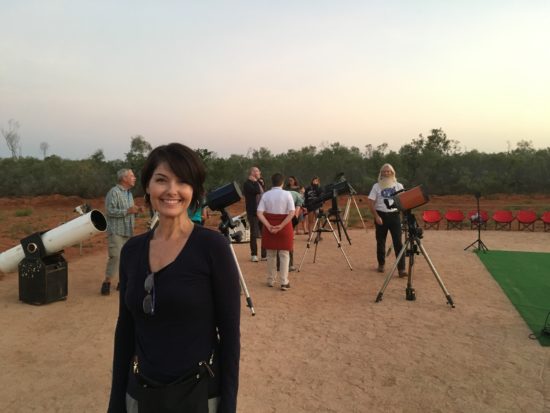 Here’s Jamie standing in the middle of the clearing in the outback, just after we arrived, just before sundown. 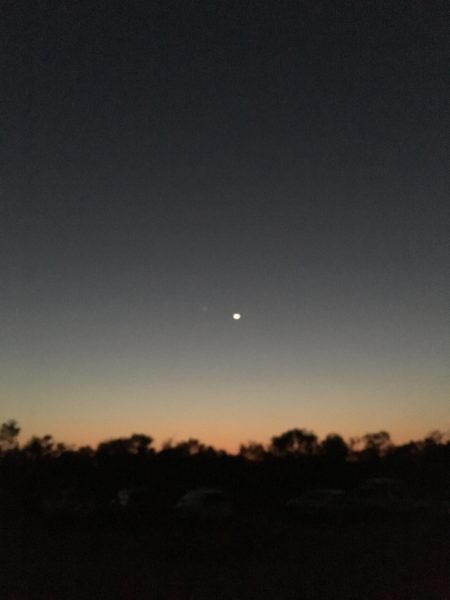 Not a great shot by any means, but it shows you how low the moon was on the horizon at the beginning of the evening. A few minutes later, it set beyond the horizon to leave us in complete darkness. 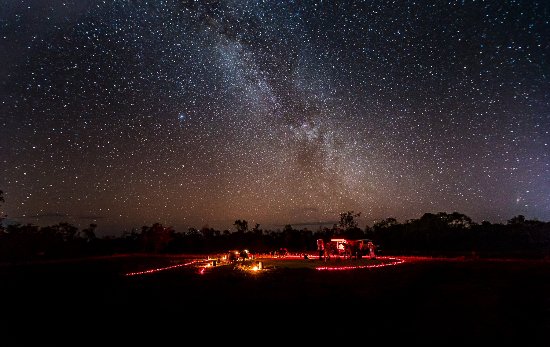 Here’s what the clearing looked like at the end of Greg’s astronomical extravaganza. The perimeter of red lights allows us to navigate from telescope to telescope without stumbling into each other, yet doesn’t interfere with the nighttime sky. The Milky Way is really incredible on a clear night away from city lights. It almost provides enough light to read by.