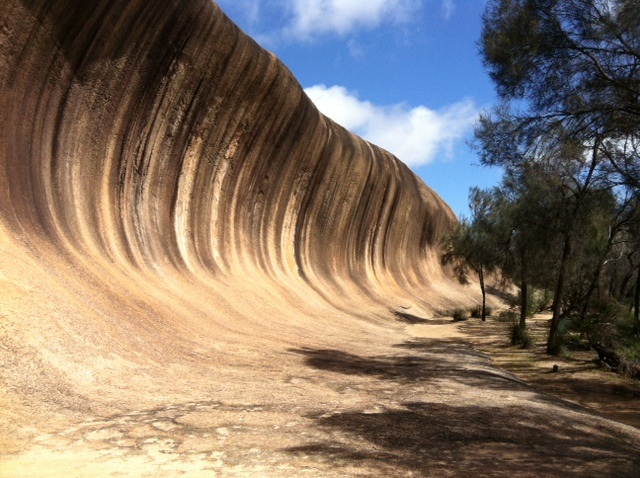 The first time Jamie and I visited Western Australia together, she announced that she wanted to see Wave Rock, a strange natural formation located out in the middle of nowhere hours east of Perth.

First thing to keep in mind: Western Australia is huge. Unbelievably huge. It’s as big as the continental United States west of the Rockies. But my role in life is to help make Jamie’s fantasies come true and in the case of Wave Rock, that meant driving about eight hours out of our way.

We got there and she was beaming. We got out of the car and meandered up the short path that leads from the parking lot to the rock. By the time we took about three photos Jamie said, “I’m done. Let’s get out of here. The flies are driving me crazy.”

I couldn’t freakin’ believe it. I had just driven several hours so she could spend three minutes taking a handful of photos?

“Are you kidding me? I told you the outback was full of big, horrible flies before we ever came out here.”

“I know,” she said. “But I never thought they’d be this annoying.”

We trudged back down the path to the parking lot, climbed back into the car and drove five hours back to Perth.

I tell you this story because much to our surprise we found ourselves driving past Wave Rock today on our trip between Esperance and Cervantes, Western Australia. I looked at Jamie and said, “It’s cold and windy. There won’t be any flies.” I paid the $10 admission fee and we again walked the 100 yards from the parking lot to the rock.

So I think it really didn’t have anything to do with the flies. I think she just doesn’t like Wave Rock. Oh, I’m sure she’d deny that, but what other conclusion can I draw?

One thing has changed, however. Thanks to the miracle of digital cameras, we were now able to take selfies instead of asking a vision-challenged stranger to take our photo in front of Wave Rock.