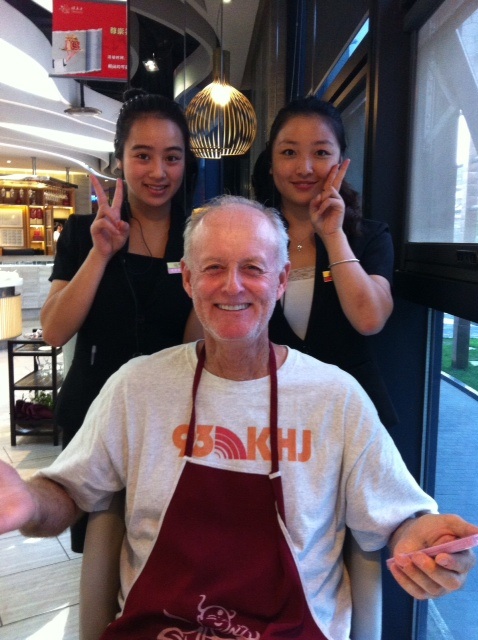 Hot pots are a very popular dish in China, but especially here in Chengdu. Jamie had no idea what a hot pot was, but decided that we should try one for dinner.

She found a restaurant that specializes in hot pots just around the corner from our hotel. We went in and sat down, but realized pretty quickly that we were in trouble. The menu was entirely in Chinese with no English translations and none of the waitresses spoke a word of English.

Two of those waitresses — Sisi and Gaoxia — were unbelievably cute and they tried soooooo hard to help us. One of them pulled out her cell phone and brought up a translation app. We eventually worked it all out and each ordered a hot pot.

So now I guess I need to explain exactly what a hot pot is. It’s a pot that’s split into two halves. Half the pot contains a very spicy broth and the other half has a more mild one. Our table had a burner for each of our pots and they worked our broths to a low boil.

The waitresses started bringing things to the table and motioning that we should add them to our pots. Things like fish heads, meat, cabbage, lettuce, tomato, yams, and a few other items we were unable to identify.

It was hot. Really hot. Jamie and I were both sweating. We’re not sure if it was caused by the spicy broth, the heat generated by the boiling soup, or the stress we were both feeling.

At one point Sisi and Gaoxia took pity on us and brought spoons to our table. I used mine, Jamie didn’t use hers.

It was so much fun. The waitresses were great sports. They ended up going down the elevator with us to continue our Google Translate conversation.

So what’s our verdict on hot pots? Tasty. But next time, we’ll tell ’em to hold the fish heads.